My kind of people 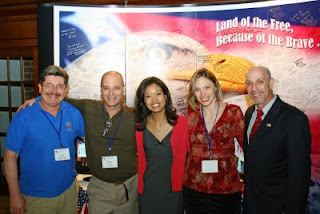 If you're wondering why I didn't post anything on Friday, it's because I spent part of the day at the Four Points Sheraton near Harrisburg attending the 2008 Pennsylvania Leadership Conference.

I was invited to be part of the "Pundits, Pollsters and Policy" panel Friday afternoon (I think I was one of the pundits on the panel). I also spent time before and after the presentation meeting some terrific people.

The sold-out conference was first-class all the way. With 500 conservatives gathered in one place, how can you go wrong?

I met some of my brothers-in-arms from the reform movement -- Lowman Henry, Chris Lilik, Ryan Shafik, Nathan Benefield -- in person for the first time.

I also spent time with a terrific young lady who blogs under the name "Skye" at Midnight Blue. Check out her blog if you get a chance. She posted several photos from the event at her site, including the one I borrowed here. That's Skye with Michelle Malkin and members of American Sheepdogs, a Chester County group that supports U.S. troops fighting in Iraq and Afghanistan. I applaud Rich Davis and the rest of the American Sheepdogs for all they do for our troops. There's also coverage of the conference at PAWaterCooler.com

The speech by Michael Steele, lieutenant governor of Maryland and a rising star in the Republican Party, was excellent. Because of a prior commitment, I had to leave early on Friday and missed the speech by Michelle Malkin.

There were also quite a few political figures at the conference. I met state Rep. Jim Cox, R-Berks, and Gary Hornberger, who won the GOP nomination to run in the 125th District in Berks/Schuylkill. Both mentioned they were fans of my blog.

I chatted with people from Montgomery, Chester and Berks counties. I drove 70 miles to meet some of these people for the first time when they were right in my backyard.

There was also plenty of information to pick up from exhibitors, including American Sheepdogs, Chester County Action, Stop Teacher Strikes Inc., and PaSchoolWatch.org

I had a great time, although I wish I could have stayed for the entire event. I'd like to thank Lowman Henry for inviting me to be part of the 2008 conference.

If you have any interest in politics, if you consider yourself a conservative, if you want to hear some of the most dynamic speakers around, make sure you attend next year's event.

The 2009 Pennsylvania Leadership Conference will mark the 20th anniversary of the event.

Thanks for the notice, Tony! It was a pleasure to meet you at PLC!

Great job on the Panel Tony. I'll definitely be visting your blog regularly now. Very impressive working your butt off at the paper and then giving more time to what I would feel seems to be a great passion of yours.

It was nice meeting you Tony, I see you put a link up for my new blog. thanks again. I look forward to seeing you next year.

Tony - It was an honor and thrill to meet you at the PLC.

Like you, I throughly enjoyed being there. I met so many new friends from up and down the Conservative ladder in Pennsylvania.

So many great Americans came by our booth to say "hello".

Michelle Malkin was most gracious and was very appreciative of what we are doing here in PA.

I urge everyone to attend the PLC next year. (It's in March, just 10 months away!)

Thanks for visiting our booth and for your kind words about our group (American Sheepdogs).

We get about 30-40 patriots every Saturday and we hold flags and signs of support for our brave troops and their noble mission.

Too bad you missed Michelle Malkin's speech, it was terrific - I missed Michael Steele's speech.

But we can watch them both on video at their website (www.paleadershipconference.org).

If you're ever in West Chester on a Saturday, please stop by the Chester County Courthouse and say, "hello" - we're there from 11AM - 12 noon.

Again, it was great to meet you Tony.

Thank you for all you do to make PA and America better.