Still don't believe there's widespread liberal media bias? A new Gallup poll finds 55 percent of Democrats trust the media, while two-thirds of Republicans and Independents DO NOT trust the media. It's clear Democrats are OK with the media because it helps push their agenda.
Trust in Media Drops Even Lower: Gallup | Truth Revolt

A climate of delusion over global warming

The Stalking Dead Closes In On Hillary 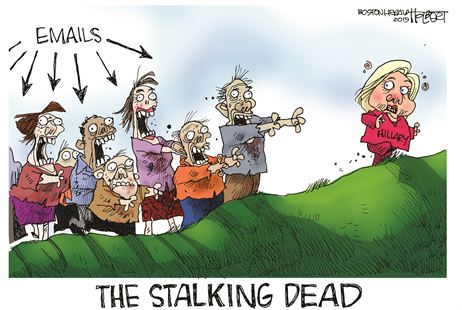 Hillary Clinton: Lying to Voters is 'Badge of Intellectual Courage' 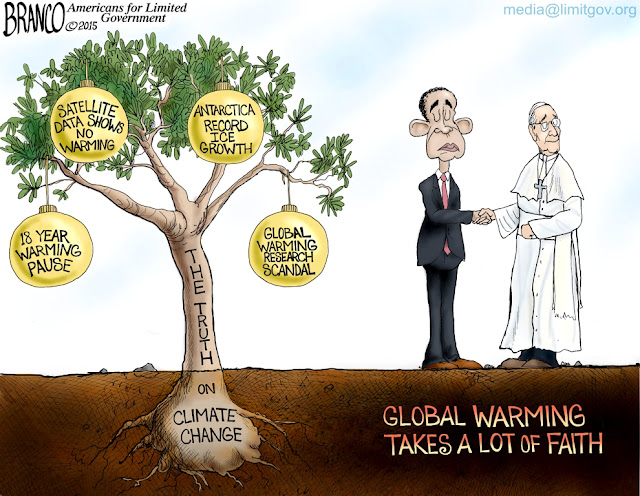 Is there a bigger hypocrite on this planet than Hillary Clinton?

Clinton Fundraises With Oil Magnates Despite Opposition to Keystone XL 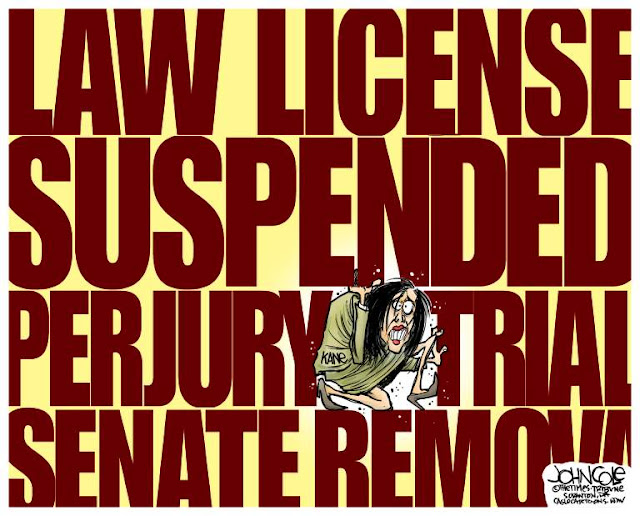 My site counter has recorded 1,450,000 Page Views from 540,000 Unique Visitors to Tony Phyrillas on Politics. Thanks for checking out my blog ... and come back again.

Trouble in Clintonland: Unions Hold Back on Hillary Endorsement

Obama's America: One in Five Children Live in Poverty

Census: One in Five Children Live in Poverty 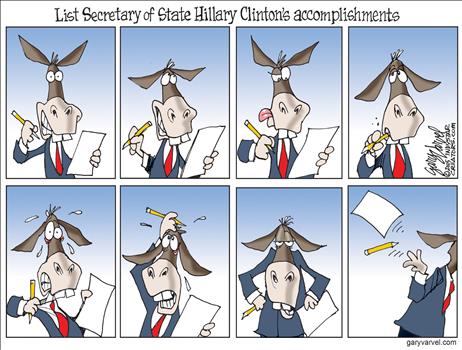 Since embattled Pennsylvania Attorney General Kathleen Kane refuses to resign, The Philadelphia Inquirer has renewed it demand for the state Legislature to remove the Democrat from office:


"... although the already clear case for her resignation has only become clearer, Kane can be expected to continue to cling to the public payroll despite her increasingly obvious unfitness for office and the repercussions for the commonwealth. The legislature and Gov. Wolf should  therefore take steps to remove her from office as prescribed by the state constitution. Kane, like any other citizen, does have a right to answer the charges against her in court. But she is not entitled to do so as the state's top law enforcement official."

Editorial: Kane should be removed

From The Pittsburgh Tribune-Review:


Schools excluded from the Scorecard include conservative and religious colleges, including Christian seminaries, Bible colleges and at least one Jewish Talmudical seminary. Some reject federal aid because they don't want to be bound by federal mandates, but critics of the schools' omission say the government could be putting them at a competitive disadvantage.

Stop me if you've heard this one before: Some of Pennsylvania's leading newspapers are once again calling on embattled Pa. Attorney General Kathleen Kane to resign her office following a unanimous state Supreme Court ruling issuing a temporary suspension of Kane's law license.

Here's a sampling below ...

The Pittsburgh Post-Gazette: Kane must quit: If not a lawyer, she shouldn't be attorney general

The Doylestown Intelligencer: No question now; Kane must go

427 Former Members of Congress Moved to Lobbying or Similar Work

427 Former Members of Congress Moved to Lobbying or Similar Work 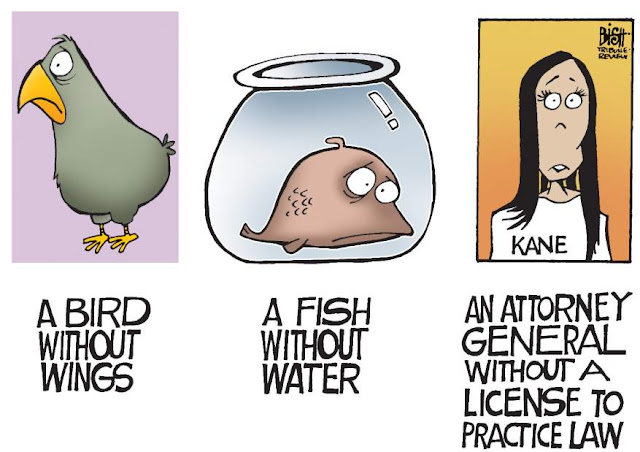 The editorial board of the Harrisburg Patriot-News is calling for the resignation of embattled Pennsylvania Attorney General Kathleen Kane - again. If you're keeping count, the left-leaning newspaper has now asked Democrat Kane to resign for the third time in the past five months.

From the newspaper's most recent editorial and very brief editorial, A simple request for Attorney General Kane:


So we're hoping the third time's the charm.
Resign.

The newspaper has also published a story on the growing chorus of Pennsylvania state lawmakers calling for Kane to step aside while she fights criminal charges filed against her in August.

The left-leaning PAPolitics political blog also has a story with the headline Republican AG Candidates Call on Kane to Resign. Read it here.

And another of Pennsylvania's most liberal newspapers, The Pittsburgh Post-Gazette, is also calling for Kane's resignation in this editorial: Kane must quit: If not a lawyer, she shouldn't be attorney general

My site counter has recorded 1,445,000 Page Views from 540,000 Unique Visitors to Tony Phyrillas on Politics. Thanks for checking out my blog ... and come back again. 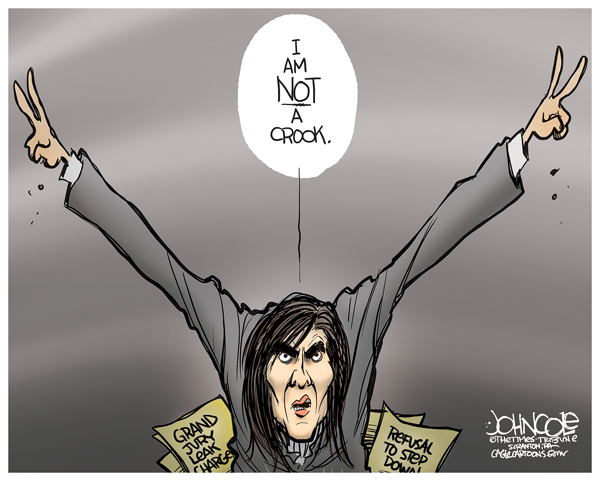 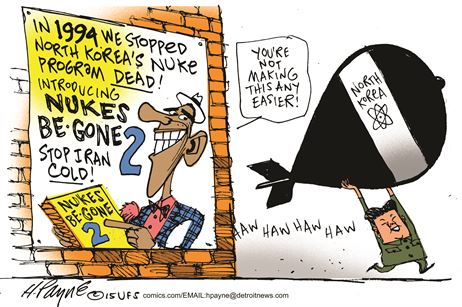 FACT CHECK: Hillary Clinton Claims 'I Am a Real Person'

FACT CHECK: Hillary Clinton Claims 'I Am a Real Person'

These 25 Politicians are the Biggest Recipients of Planned Parenthood Funding

Would is surprise anyone to learn that the 25 House members who get the most money from Planned Parenthood are all Democrats?

These 25 Politicians are the Biggest Recipients of Planned Parenthood Funding

43 States Will Use Outdated Voting Machines in 2016

43 States Will Use Outdated Voting Machines in 2016

The New and Improved Hillary Clinton 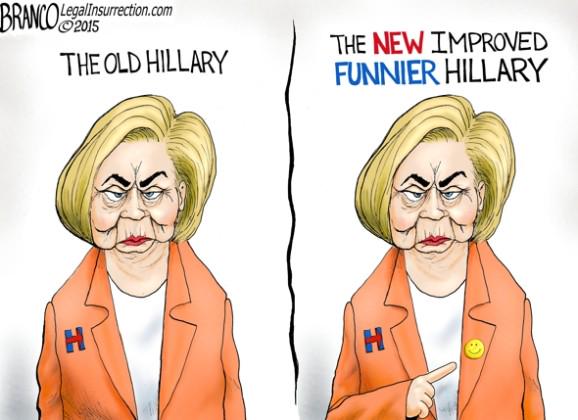 When you lose the argument, as liberals often do, you tend to start swearing at anyone who disagrees with you.

Barack Obama, who negotiated this deal, wants us to believe his Iran nuke deal is also good for the US.

Incomes 6.5% Lower than When Recession Began, Down 1.5% Since Last Year

The Middle Class has been crushed by Barack Obama's economic policies, the very same ones Hillary Clinton wants to continue.

Incomes 6.5% Lower than When Recession Began, Down 1.5% Since Last Year 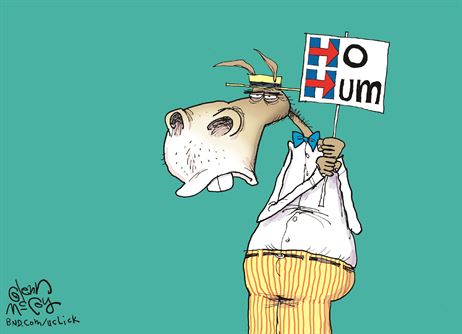 Obamacare Premiums Could Rise by 23% Next Year

Obamacare Premiums Could Rise by 23 Percent Next Year

Most Americans Disapprove of Obama's Handling of Iran

Most Americans Disapprove of Obama's Handling of Iran | Frontpage Mag

Bringing America To Its Knees 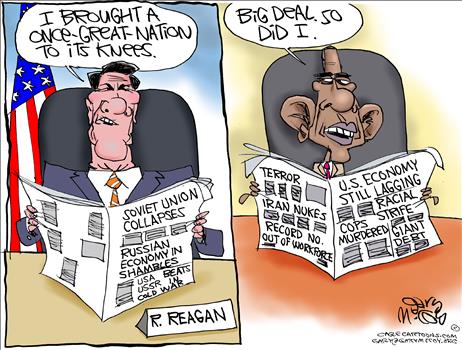 Rep. Joe Pitts: Why I Cannot Support The Iran Agreement

The first and most important duty of a government is the protection of its citizens. If we fail to do this, then all of our other activities and programs are of no effect.

As Congress and the President decide how to act in response to Iran’s nuclear weapons program, this is our purpose, and the standard we must constantly bear in mind.

Negotiating with Iran at all is difficult, if only because of the regime’s 36 year history of terrorism, brutality, and violations of human rights. As Nobel Peace Prize winner Elie Wiesel put it, “regimes rooted in brutality must never be trusted. And the words and actions of the leadership of Iran leave no doubt as to their intentions.”

Nevertheless, I support finding a diplomatic solution to the crisis of a nuclear Iran. In March, I joined with 366 of my fellow Members of Congress, including 130 Democrats, in a letter to President Obama. All of us agreed, though from different parts of the country, different backgrounds, and different parties, that any deal with Iran must last for multiple decades and include full disclosure of Iran’s past nuclear pursuits.

In July, after nearly a decade of negotiation, the President made his proposal public. The proposed executive agreement would only be temporary. Iran’s current low-enriched uranium would be reduced by 98%, but only for 10 years. Iran would be free to produce as much nuclear fuel as they wish after 15 years, and do research on advanced centrifuges after 8 years. And in a major deviation of nonproliferation precedent, the embargo on conventional arms trade and ballistic missiles trade with Iran would be lifted.
The President’s proposal did not meet the bipartisan criteria we laid out in our letter. These provisions are bad enough by themselves to make this agreement deserve opposition, but since we found out about them, there have been some important developments that make the agreement even worse for the United States and its interests.
We found out, for example, that that United Nations’ International Atomic Energy Agency (IAEA) inspectors will not have access to the Parchin military complex, a site where the IAEA suspects that weaponization activities have taken place. Instead, the IAEA and the world community will have to rely on Iran’s own inspections of that site.
It is no surprise then that the majority of both chambers of Congress oppose the President's Iran proposal. But as of this week, 42 Senators, all Democrats, now support the proposal, which makes an override of the President’s veto of our resolution of disapproval impossible. Thus, unless nine Senators change their votes, the proposal will go into effect.

It is noteworthy that even that minority of the Senate that has publicly supported the proposal has been tepid and unenthusiastic about it. Even Charles Schumer, among the most liberal of Senators, could not bring himself to support it.

If it does go into effect after all, what can we expect? We know that Iran will receive an influx of funding worth roughly half the size of their entire economy. We can expect that Iran will spend this money the same way they spend the money they have now: funding terrorism, intruding upon the sovereignty of Middle Eastern countries, and building up their military. In fact, with the arms embargo ended, Iran will likely have a lot of shopping to do. Even Vice President Biden conceded that this is “a totally legitimate argument” against the President’s proposal.

We can expect that Iran will continue to attempt to dominate its neighbors, funding the Houthi rebels in Yemen, Hezbollah terrorists in Lebanon, and Shia militia in Iraq that have killed American troops.

There is not a single shred of evidence in support of faith that Iran will change for the better as a result of this windfall.

We should conduct diplomacy, but not for diplomacy’s sake. What the United States ultimately decides to do about the Islamic Republic of Iran will be the single most important foreign policy decision in the generation since the fall of communism in 1989. I wish that I could support the proposed agreement, but under present circumstances I cannot.

US Rep. Joe Pitts is a Republican who represents Pennsylvania's 16th Congressional District.

Obama To Choose the Best College for You!

Obama To Choose the Best College for You! | Truth Revolt

Record US Tax Collections, But Obama Spends Even More

Is The Postal Service Making War on Religion?

Remembering The Victims of 9/11 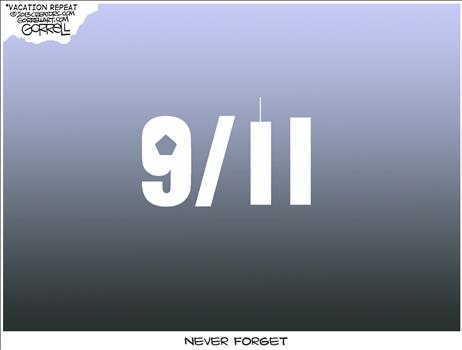 Some More Things Hillary Clinton Should Apologize For

Here Are Some More Things Hillary Clinton Should Apologize For 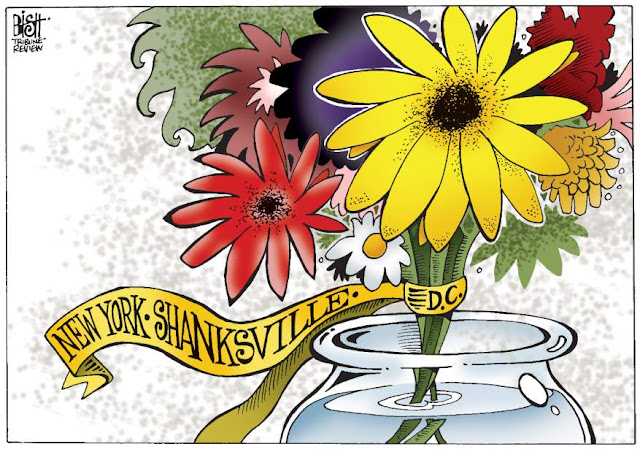 The fruits of the Obama-Clinton foreign policy: The persecution of Christians throughout the Middle East ... nukes for Iran ... Chinese warships in U.S. waters ... Russian military aggression ... the growth of ISIS ... the invasion of Europe by refugees. Heckavu job, Barack.

Failure To Learn From History ... 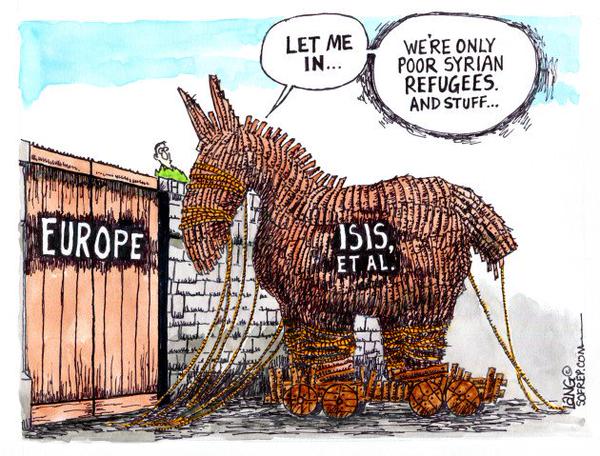 NBC Teams Up With Democratic Party Firm for 2016 Campaign Coverage

NBC Teams Up With Dem Firm for 2016 Campaign Coverage

Liberal Internet: Sexism Is behind Investigation of Hillary Clinton's E-mails

You know liberals have lost the argument when they start playing the sexism card.

Liberal Internet: Sexism Is behind Investigation of Hillary Clinton's E-mails

What Democrats are doing 'for our children' 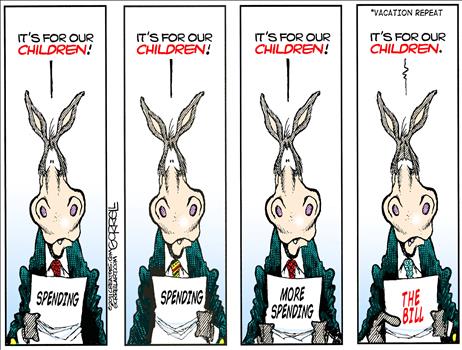 Another example of how liberalism is a mental disorder ...
A Choir Replaced 'Jesus' with 'Hillary' in Campaign Rally Song 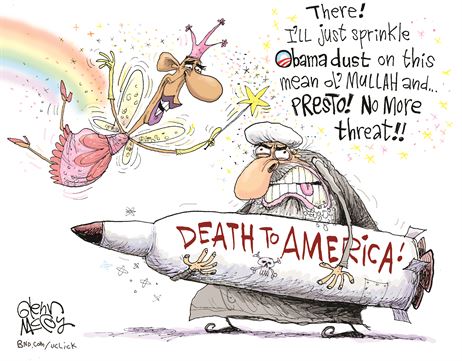 My site counter has recorded 1,430,000 Page Views from 538,000 Unique Visitors to Tony Phyrillas on Politics. Thanks for checking out my blog ... and come back again.

The mess that is the Pa. AG's office under Kathleen Kane

Brad Bumsted: The mess that is the Pa. AG's office

The Biggest Threat to America? 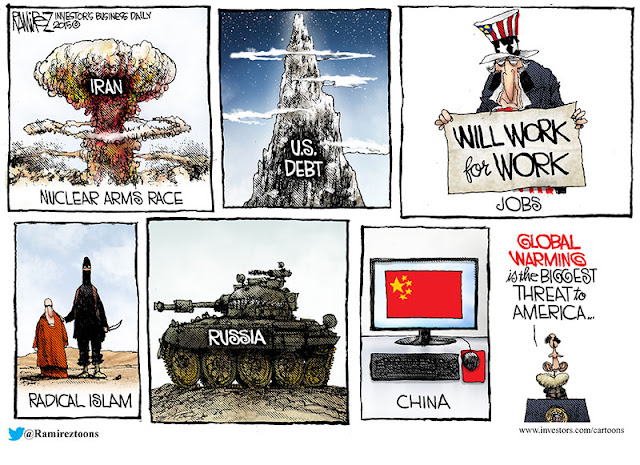 Must students deny religion to get college degree?

Marisa Martin: Must students deny religion to get college degree?

ISIS smuggler: 'We will use refugee crisis to infiltrate West'

ISIS smuggler: 'We will use refugee crisis to infiltrate West'

Obama Iran Deal: The Devil Is In The Details

Ann Coulter: How to Write a NY Times Op-Ed in Three Easy Steps!

All of Taylor Swifts Videos Are Racist and/or Sexist

In Pennsylvania, Corruption is Spelled P-L-C-B 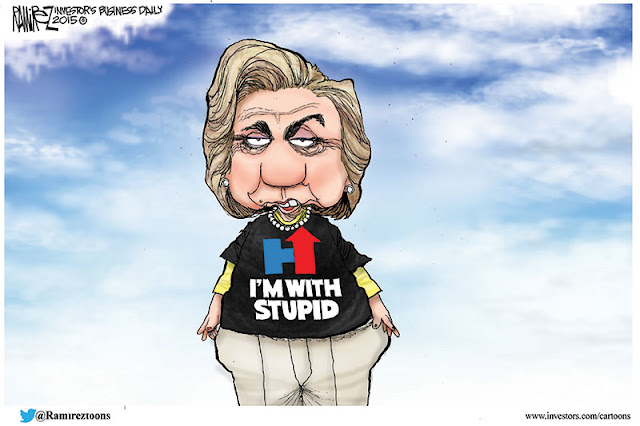 Clinton Lackey Stephanopoulos Hammers Trump: Are You a Real Conservative?

George Stephanopoulos Hammers Trump: Are You a Real Conservative?

Democrats Receive 87% of Donations Made by Univision

Poll: Hillary Clinton's Unfavorable Rating Has Doubled Since She Quit Her Job as Secretary of State

Poll: Hillary Clinton's Unfavorable Rating Has Doubled Since She Quit Her Job as Secretary of State 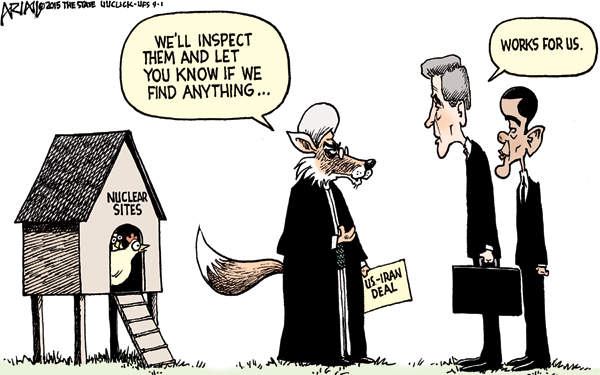 Report: 76% of Immigrant Households with Children on Welfare

Report: 76% of Immigrant Households with Children on Welfare | Truth Revolt

Be sure to thank Obama for rising electric bills 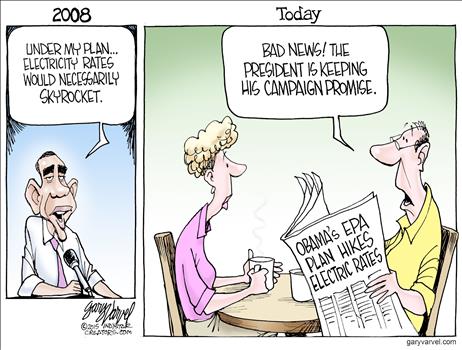