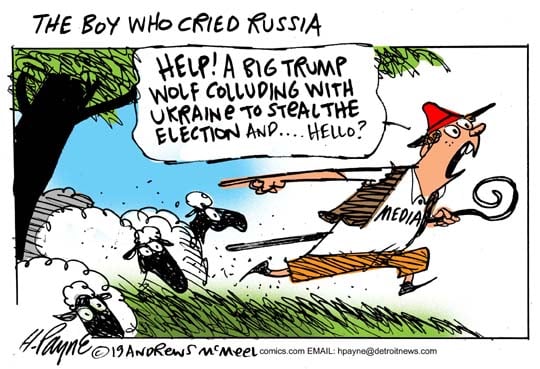 The left-wing media hates President Trump so much they feel compelled to make stuff up. No wonder public trust in the news media is at an all-time low. Trump has been right all along about Fake News.

CNN Cut 540 Words To Frame Trump For 'Favor' He Never Requested: CNN and other outlets skipped an entire section of the released and unredacted transcript of a phone call between Trump and the Ukrainian president.

Congressional Democrats Have No Credibility On Impeachment 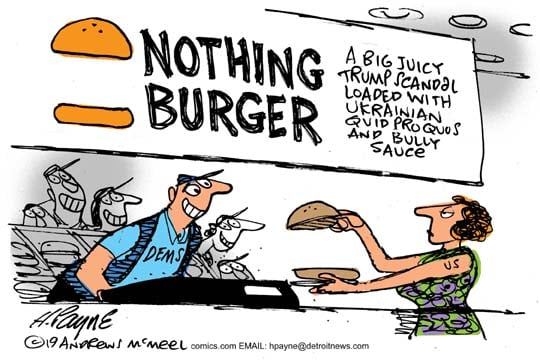 Since Obamacare, Waiting Lists For Disabled Care Grew 40 Percent: Each of the Democrat candidates’ proposals would expand Washington’s role, and sabotage private insurance like Obamacare did.

The Rapid Decline of The New York Times 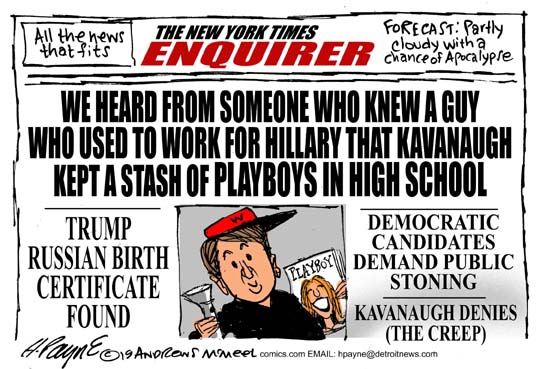 Media Corruption On Perfect Display In One Washington Post Paragraph

Media Corruption On Perfect Display In One Washington Post Paragraph: Every assertion of this paragraph isn't just wrong, but the opposite of right. In each sentence, Trump is being blamed for things his opponents have done.

Like Russian Collusion, Ukraine Hysteria Is Projection By Dems, Media

Like Russian Collusion, Ukraine Hysteria Is Projection By Dems, Media: The only 2016 campaign that colluded with Russia was Hillary Clinton's, and the only 2020 candidate who bribed Ukraine to fire a prosecutor is Joe Biden.

Unhinged NeverTrumper Suggests Trump Should Be Executed For Ukraine Call

NeverTrumper Suggests Trump Should Be Executed For Ukraine Call: Former Massachusetts Republican governor Bill Weld argued that the president could face execution over a conversation with the Ukrainian president.

Remy: All My Loving (Beatles Parody)

The U.S. Doesn't Need An Afghanistan Deal. We Just Need To Leave

The U.S. Doesn't Need An Afghanistan Deal. We Just Need To Leave: The United States’ top priority should be leaving Afghanistan, not securing a deal that would mostly be a public relations win. 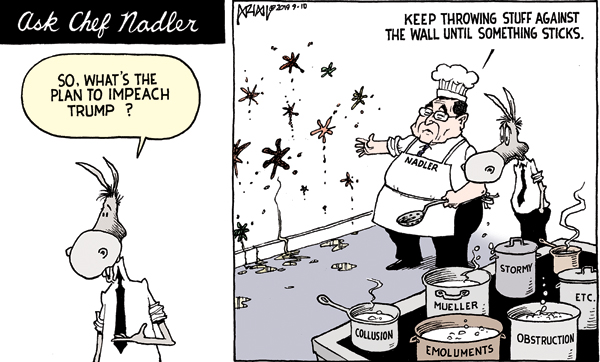 When EU Becomes An Empire, Its Clash With The U.S. Is Inevitable

When EU Becomes An Empire, Its Clash With The U.S. Is Inevitable: 'The world of tomorrow is a world of empires, in which we can only defend your interests in a European framework,' says a key EU leader.

Why Plastic Straws Are Actually Better For The Planet Than Paper Straws: Don't be convinced you're saving Earth by drinking out of a terrible straw. Plastic straws aren't killing the planet, and science can’t stop proving it. 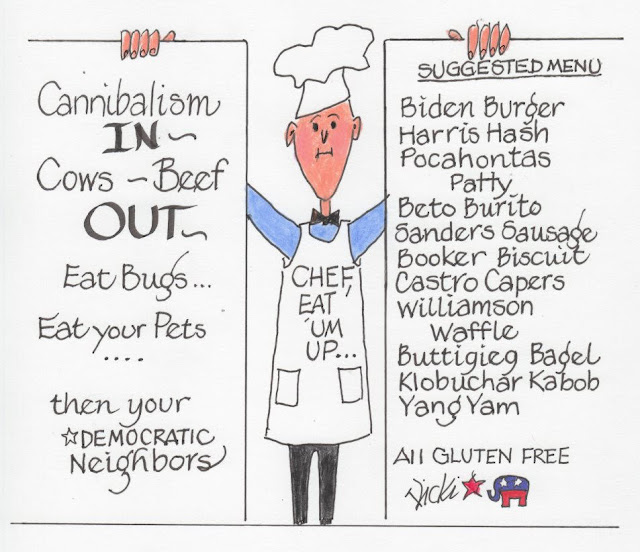 Things you find out when you Google yourself 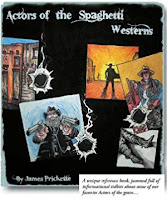 Have you ever Googled yourself? Come on, admit it. Who hasn’t?

My name pops up in a lot of places on the Internet because I work for a newspaper and have been known to write a story or two. Or 5,000 or 6,000 … but who’s counting? I’ve also posted hundreds of my opinion columns online ... way back when I had the time to write columns.

Once in a while, my name pops up in the strangest places. Until recently, I had no idea that I was mentioned in a book.

It wasn’t exactly a best seller, but there I am on page 456 of “Actors of the Spaghetti Westerns” by James Prickette. I gotta hand it to Mr. Prickette for doing extensive research on the actors who appeared in a series of classic 1960s movies directed by the legendary Sergio Leone.

So how do I fit in with Clint Eastwood, Eli Wallach and Sergio Leone? This is where I applaud Mr. Prickette for doing his homework.

I wrote an article way back in 1989 about actor Lee Van Cleef, who died of a heart attack that December at age of 64. While his name may not have been a household word, everyone who has ever watched Westerns will instantly recognize Van Cleef. It’s a face you won't soon forget.

He’s best known for the “Spaghetti Westerns” that were critical and box-office hits in the mid-1960s and made a star out of a little-known TV actor named Clint Eastwood. Van Cleef played Eastwood’s arch-rival in two of the films, “For A Few Dollars More” in 1965 and “The Good, the Bad and the Ugly” in 1966.

In the latter film, Van Cleef played “the Bad” of the title trio, with Eastwood (“the Good”) and Eli Wallach (“the Ugly”) handling the other two leads.

I wasn’t working for Variety magazine or The Hollywood Reporter at the time of Van Cleef’s death. Turns out the actor was a native of Somerville, N.J., and I was an editor at the Somerset Messenger Gazette, a community newspaper based in Somerville.

I was also the biggest Clint Eastwood fan around and everyone at the newspaper knew it. While I normally assigned stories to reporters, I decided to write about Van Cleef's untimely passing myself.

It was the first and so far the only opportunity to mention my favorite actor — Clint Eastwood — in a news story.

The article I wrote was titled, “Somerville remembers the good side of a ‘bad guy’” and I was able to track down several local residents who grew up with Van Cleef and remembered him fondly before he went off to Hollywood to make a name for himself in moving pictures.

Back to James Prickette and his book. The author billed the book as “A unique reference book, jammed full of informational tidbits about some of our favorite actors of the genre…”

And he certainly did find unique information, referencing the article I wrote in which I recounted that a young Lee Van Cleef wrote a column for The Messenger Gazette about his experiences in Hollywood. The newspaper featured many dispatches about Van Cleef as his career blossomed in television and eventually the big screen.

Not every small town can boast a well-known actor. Van Cleef would often write letters of thanks to The Messenger Gazette, expressing his gratitude for publicity about his acting career chronicled in his hometown paper.

Prickette used that anecdote and a few others from my article in his book.

So there you have it. A nearly 30-year-old article about Lee Van Cleef found its way into a book and immortality … as long as Google is around.

Tony Phyrillas is editor of The Mercury in Pottstown and remains a huge Clint Eastwood fan to this day. 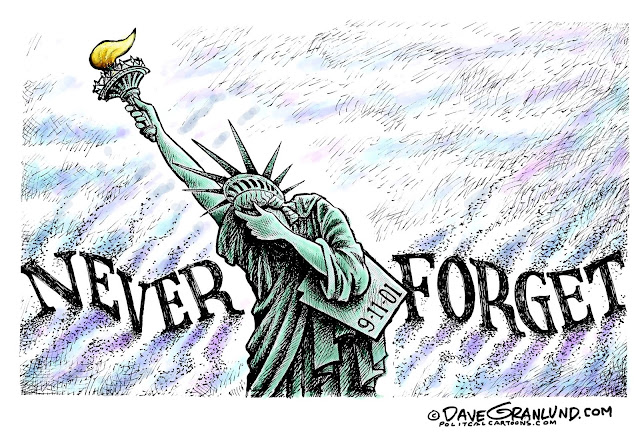 Democrat Rep's Wife Demands Free Marriage Counseling In Health Plan: If Democrats don’t like Obamacare plans for themselves, then why did they force all Americans to buy this insurance under penalty of taxation?

Joe Biden Isn't Even Close To A Moderate

Joe Biden Isn't Even Close To A Moderate: Biden’s phony moderate shtick will only hold up for so long, as true moderates will see his tendency to move left with the rest of the party on key issues. 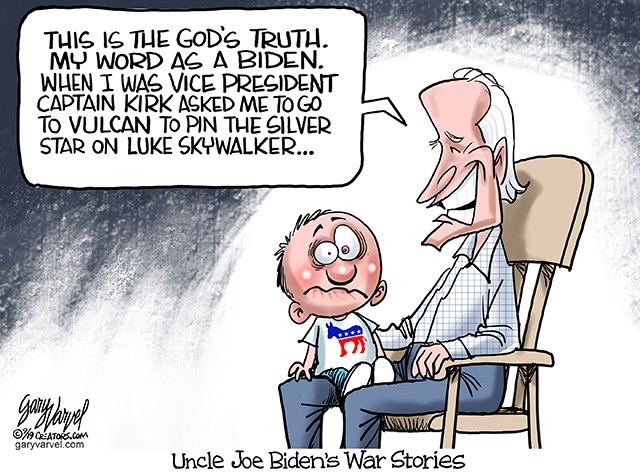 Democrats Continue To Turn On The Constitution

Democrats Continue To Turn On The Constitution: I'm sorry the Constitution is an annoyance, but the state isn’t here to give you everything you want—not even if what you want is extraordinarily popular.

Bloomberg Hit Piece Is Why Americans Distrust The Media

Bloomberg Hit Piece Is Why Americans Distrust The Media: Ben Penn’s smear of Leif Olson is the latest example of how cancel culture is hollowing out civic life and undermining the media’s credibility.

Dems Propose First Gun Grab Since Lexington And Concord: The media should stop using phrases like 'mandatory gun buybacks.' What Democrats propose is the first-ever national confiscation of guns.

The New Star Wars Land Is Proof Disney Has Lost Its Way: The opening of Star Wars Land represents the continuation of Disney's trend: focusing almost exclusively on sequels, remakes, and marketing.