President Trump: First 100 days in office 'most successful in US history'

Professor Offended by Student Reading Bible, Calls Department Chair to Make Him Stop: A history professor at Northern Arizona University was triggered by seeing a student reading his Bible in the few minutes before class started and called a department head in to force him to stop. Campus Reform published the audio of the conversation.

Honeymoon from Hell: The Liberal Media vs. President Trump

Honeymoon from Hell: The Liberal Media vs. President Trump: As President Trump approaches the end of his first 100 days in office, he has received by far the most hostile press treatment of any incoming American president, with the broadcast networks punishing him with coverage that has been 89% negative. The networks largely ignored important national priorities such as jobs and the fight against ISIS, in favor of a news agenda that has been dominated by anti-Trump controversies and which closely matches what would be expected from an opposition party.

President Trump's message for Passover/Easter: 'America is a nation of believers'

Feds Collect Record Taxes, STILL Running a Deficit: Despite having collected another round of record-breaking taxes, the federal government is still running a deficit.

Arrests of illegal criminals jumps 250% in one week

Arrests of illegal criminals jumps 250% in one week: As promised, immigration police have expanded their campaign to deport illegals with criminal records, announcing the seizure of 368 illegals in seven states and Washington, D.C. That nearly a 250 percent increase over the 106 announced a week earlier. The biggest seizures by Immigration and Customs Enforcement agents were in Texas, but they made arrests as far north as Wyoming. What's more, they targeted members of the violent MS-13 gang and illegals charged with sex crimes against kids. In one five-day campaign around Virginia and Washington, 82 illegals from 26 countries were arrested. ICE described them this way: Of the 82 individuals arrested, 68 had previous criminal convictions for crimes like armed robbery, larceny and drug distribution. Of the remaining 14, two had ties to the MS-13 street gang; two had outstanding final orders of removal; three had overstayed their visas; one was wanted by a foreign law enforcement entity; one was a verified human rights violator and two had pending local charges. The remainder had unlawfully entered the United States in violation of U.S. immigration laws.

Half of all federal arrests are immigration-related, 61% non-citizens

Justice: Half of all federal arrests are immigration-related, 61% non-citizens: Immigration crimes, including illegal border crossings, now account for half of all arrests by federal agents, a doubling in just 11 years, according to the Justice Department. Newly analyzed Bureau of Justice Statistics also show that 61 percent of those arrested are non-citizens. And, according to a Pew Research Center analysis of the numbers, arrests for other top crimes — weapons, drugs, fraud and parole violations — have dropped. 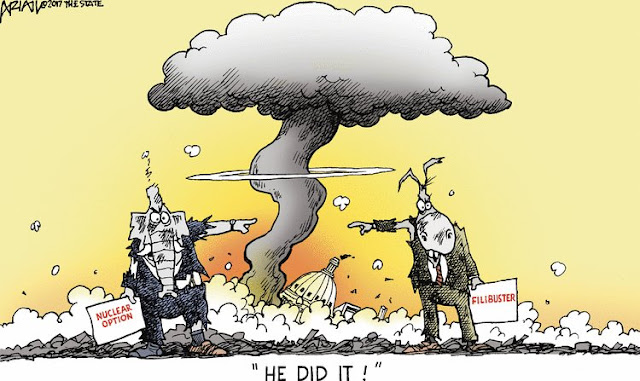 High School Journos Discover New Principal Had Fake Credentials: A newly-hired principal at Pittsburg High School in Pittsburg, Kansas, was forced to resign from her promised $93,000 per year job after student journalists found out her credentials were fake. “She was going to be the head of our school, and we wanted be assured that she was qualified and had the proper credentials,” Trina Paul, one of the reporters from the school’s paper, said. “We stumbled on some things that most might not consider legitimate credentials.”

On the eve of Judge Neil Gorsuch's confirmation vote to the U.S. Supreme Court, Republican leaders in Pennsylvania gathered in Harrisburg to show their support. 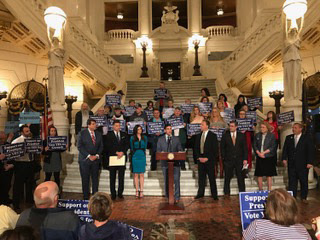 From the Republican Party of Pennsylvania:

HARRISBURG — Earlier today, GOP leaders Val DiGiorgio and Dave Feidt participated in Pennsylvania’s Gather For Gorsuch held in the State Capitol Rotunda. Their on-the-record statements from the event can be found below:

"Senate Democrats — including Bob Casey — are thwarting the will of the majority. Pennsylvanians have had enough of Senator Casey's obstructionism and hypocrisy. Keystone State voters chose President Trump to pick the next Supreme Court Justice, and by nominating Judge Gorsuch he picked a proven mainstream conservative.

"In joining Senate Democrats in their partisan filibuster of Judge Gorsuch, Senator Casey has made a decision to engage in political grandstanding instead of doing what's in the best interest of his constituents. Pennsylvania voters will remember this obstructionist approaching to governing and hold him accountable at the ballot box in 2018.”

“Judge Neil Gorsuch has earned praise from leaders on both sides of the aisle. Most notably, he has earned the unanimous support of the American Bar Association. As a lawyer myself, I understand the significance of receiving unanimous support of the Bar Association — it is truly a testament to his credentials.
"Unfortunately, Senate Democrats including Pennsylvania’s Bob Casey, have decided to toss credentials aside in favor of petty partisan politics. Senator Casey is standing with the far left of his Party in opposition to Judge Gorsuch simply because 'he isn’t their guy.’"

ICE Report Refutes Argument That Sanctuary Cities Aren't a Problem: According to the Daily Caller, an Immigration and Customs Enforcement report subverts the argument that sanctuary cities aren’t a problem because they shield only non-violent illegal immigrants.

I originally started this blog as a way to archive my columns since the The Mercury website at the time was not very user-friendly.

I had a nice run as a columnist for The Mercury, winning several state and national awards, but as my responsibilities at the newspaper expanded, I had less time to write.

Many of the columns I wrote between 2005 and 2012 can be accessed at WebCommentary.com

Click on the Commentary link at the top of the page and then scroll through the list of contributors to find my name.

WaPo Fact Check: Democrats Lying to Delay Gorsuch Confirmation: The Washington Post doesn’t get it right most of the time, but it’s much appreciated when they do. In its latest Fact Checker release, the Post reveals that the Democrats have been lying in order to delay the confirmation of President Trump’s Supreme Court pick, Neil Gorsuch, by repeating a “false talking point.”

President Trump makes the case for confirmation of Judge Gorsuch