5 freed from Gitmo in exchange for Bergdahl join Taliban’s political office in Qatar: They may complicate efforts toward peace talks with Taliban, some analysts say.

A new study finds the majority of adults has anywhere between two and five close friends, but one in five regularly or often feels lonely.

U.S. Adults Have Few Friends — and They’re Mostly Alike - Barna Group: In light of a loneliness epidemic in this country, Barna takes a look at the state of friendship in America.

Why 'Shrek 2' is a Perfect Sequel

Release of the grand jury report into child sexual abuse in the Catholic Church has dominated the news in recent months. As details of the report emerged the scope of abuse in terms of the sheer number of victims, and the institutional cover-up that followed resulted in demands for reform within the church and for government action to provide some measure of compensation to the abused.

It has taken a long time to get to this point.  Despite decades of swirling rumors the problem was not taken seriously until a few years ago.  The film "Spotlight," which details the work of Boston Globe journalists who cracked the veil of secrecy in that city's diocese, did much to raise awareness. That triggered investigations in many other venues nationwide.

In an era when the news media is rightly under scrutiny for its lagging journalistic standards the work of the Globe reporters stands out as a shining example of how reporting is supposed to work.  Coverage of this tragic story extends far beyond Boston as the media nationwide and especially here in Pennsylvania have been exemplary in the performance of their investigative and watchdog duties.

The legal system has also risen to the occasion.  Empaneling of an investigative grand jury gave prosecutors the tools needed to cut through the church's institutional barriers to arrive at the truth.  Pennsylvania Attorney General Josh Shapiro has worked hard to ensure the grand jury's report does not get relegated to collect dust on a shelf, but rather becomes the impetus for reform.

And then there is the Pennsylvania legislature.  It is crystal clear that existing state statutes are inadequate to the task of providing victims with a mechanism for gaining compensation for the mental and physical anguish they have suffered at the hands of clergy. Regrettably, release of the grand jury report came at a time when the legislature had adjourned for a nearly three month summer recess.  That left little time for lawmakers to act when they returned to session in mid-September.

House Speaker Mike Turzai got behind what was termed a "compromise" plan that would open a two year "window" for victims to file civil suits.  This action is necessary because many abuse cases date back decades and the statute of limitations has expired meaning victims can no longer sue for financial compensation. This is a widespread and extraordinary problem because institutional cover-up created a climate where victims were intimidated and therefore did not feel able to step forward.

And so the lower chamber did its job - but the weak link in the chain of responsible action has become Senate Republican leadership, specifically Senate President Pro Tempore Joseph Scarnati.   Senator Scarnati believes the "window" is unconstitutional and has instead proposed a victim's compensation fund - which has the official support of the church.

That, however, falls short of giving victims their day in court and allowing them to seek compensation on a case-by-case basis.  Senator Scarnati and by extension the entire state Senate is the one institution (aside from the church itself) that has failed to become part of the solution rather than part of the problem.

It is not the role of the legislature to determine the constitutionality of legislation.  Although it is only prudent for lawmakers to actually read the state's governing document and act accordingly, if there is a doubt that doubt should be left to the courts to decide.

Rather than stand in the way of a solution, Scarnati and the Senate should advance the concept of a "window," and send it along to Governor Tom Wolf who is expected to sign it into law.  At that point court challenges will likely ensure with the issue making its way to the Pennsylvania Supreme Court.

Given the fact they frequently ignore the state constitution in issuing decisions it is impossible to predict what the state's Supreme Court Justices will do.  However, they will either find the "window" constitutional, or rule it unconstitutional and explain why perhaps even offing suggested legislative remedies in issuing their opinion.

In other words, it is worth letting the process play out.  To do otherwise only adds to the suffering of abuse victims.  It is time to pursue every possible remedy so they might be appropriately compensated, arrive at some sort of closure, and get on with their lives.

(Lowman S. Henry is Chairman & CEO of the Lincoln Institute and host of the Lincoln Radio Journal.  His e-mail address is lhenry@lincolninstitute.org)

What the Democrats stand for ... 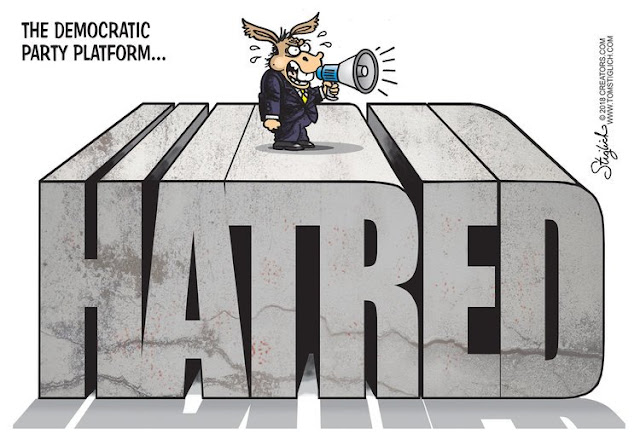 The Traveling Wilburys Debut Holds Up As Extraordinary, 30 Years Later

The Traveling Wilburys Debut Holds Up As Extraordinary, 30 Years Later: The Wilburys were the ultimate rock supergroup: Petty, George Harrison, Roy Orbison, Bob Dylan, and Jeff Lynne. What a stunning collection of talent.

Dems Blaming The Senate For Their Problems Need A Reality Check

Dems Blaming The Senate For Their Problems Need A Reality Check: Democrats' loss of political power is not the result of a structural defect; it's the result of flaws in the quality of their Senate candidates.

Alex Trebek Should Have Moderated The PA Debate Like 'Jeopardy’

Alex Trebek Should Have Moderated The PA Debate Like 'Jeopardy’: As with Alex Trebek the quiz show host, Trebek the moderator should seek to blend himself into the background, rather than seeking even more power.

Its Campaign Against Kavanaugh Exposes ACLU As A Massive Hypocrite

Its Campaign Against Kavanaugh Exposes ACLU As A Massive Hypocrite: In the case of Kavanaugh, the ACLU has abandoned its mission as the 'nation’s premier defender of the rights enshrined in the U.S. Constitution.'

Prosecutor Details 12 Huge Inconsistencies In Kavanaugh Accuser’s Story: The prosecutor who questioned Christine Blasey Ford about her allegations against Kavanaugh released a memo detailing inconsistencies in her story.