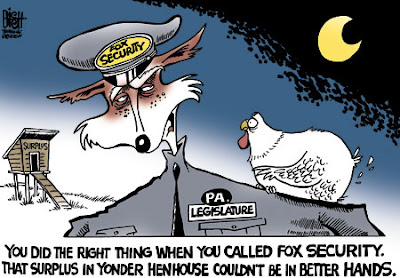 Pennsylvania had one of its best months ever in April in terms of collecting tax revenues from the state's hapless taxpayers.

Read "State has surplus from taxes" in The Mercury.

My question is this: If the state collected $437 million more than it budgeted so far in the current fiscal year, why isn't anyone talking about returning the money to state taxpayers?

Don't you think taxpayers could use some of that money to help pay for gas or buy groceries or finishing paying for their winter heating bills?

And this is just the "surplus" from the current fiscal year. The state Legislature is sitting on hundreds of millions in "surplus" dollars kept from previous years.

Everyone is talking about an economic stimulus. How about returning the $437 million to the rightful owners?

Here's some highlights from the Pennsylvania Revenue Department's monthly recap of tax collections:

Sales tax receipts totaled $729.5 million for April, which was $24.2 million below estimate. Sales tax collections year-to-date total $7.1 billion, which is $3.5 million above estimate.

Realty transfer tax was $31.3 million for April, bringing the total to $362 million for the year, which is $0.5 million less than anticipated.

In addition to the General Fund collections, the Motor License Fund received
$188.6 million for the month, $18.1 million below estimate. Fiscal year-to-date collections for the fund total $2.1 billion, which is $49.5 million, or 2.3 percent, below estimate.

The Gaming Fund received $50.7 million in unrestricted revenues for April. Fiscal year-to-date collections for the fund total $638.8 million. Gaming Fund receipts include taxes, fees and interest. Of the total for the month, $50.3 million was collected in state taxes for property tax relief, bringing the year-to-date total to $380.5 million.