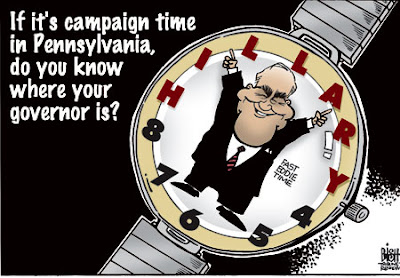 I asked the question the day after Pennsylvania's April 22 primary.

How much time did Gov. Ed Rendell spend on the campaign trail for Hillary Clinton in the six weeks leading up to the primary election? And will Rendell or the Clintons reimburse Pennsylvania taxpayers for the time the governor spent away from his day job?

That post, "Rendell owes us money," hasn't prompted the governor to address the issue -- until now.

The Pittsburgh Tribune-Review is also wondering if Rendell crossed the line between his taxpayer-paid job as governor and his round-the-clock campaigning for Sen. Clinton.

In an editorial published today, "Rendell's travels: Document it, Governor," the newspaper wants to know if the governor can account for his time in March and April.

"Did Gov. Ed Rendell unethically cross the line and use his public office for political work?" the newspaper says in the editorial.

The editorial was prompted by comments released by the office from state Rep. Sam Smith, the Republican leader in the Pennsylvania House.

The editorial notes that Rendell did not release a public schedule for 31 days beginning March 5, signifying that he had no official duties as governor during that time.

We've given Rendell the benefit of the doubt over the past five years when he does color commentary on TV after every Philadelphia Eagles' game, but this is 31 days that the governor cannot account for his time.

As the Tribune-Review aptly puts it, "Let's see the documentation, Governor."