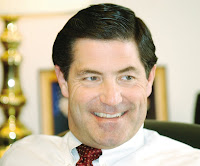 Congressman Jim Gerlach, R-6th Dist., has raised almost three times as much money as Bob Roggio, his Democratic challenger, since the beginning of the year, according to federal campaign finance records reviewed by the Daily Local News in West Chester.

Gerlach's campaign says Roggio's fundraising lag is proof the little-known Democratic candidate is out of touch with voters in the 6th District, according to Kristie.

"We think that Mr. Roggio is not raising money in the district because of his far-left, liberal stance on taxes," spokesman Mark Campbell told the newspaper.

Gerlach is sitting on a $1.5 million campaign war chest and has already spent more than $200,000 on consultants and his fundraising operation. Neither candidate faces a primary challenger.