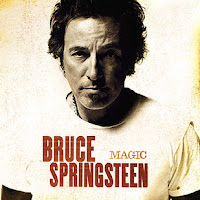 Call off the election! Bruce Springsteen has spoken. The next president of the United States should be Barack Obama, according to The Boss.

Springsteen says on his Web site that "after the terrible damage done over the past eight years, a great American reclamation project needs to be undertaken. I believe that Senator Obama is the best candidate to lead that project and to lead us into the 21st Century with a renewed sense of moral purpose and of ourselves as Americans."

Springsteen doesn't exactly have the magic touch when it comes to backing presidential candidates. Springsteen also endorsed John Kerry and Walter Mondale for president. And we all know how well that went.

"He speaks to the America I've envisioned in my music for the past 35 years," Springsteen writes on his Web site.

I own every album Springsteen has released and I don't recall any songs about rich, smooth-talking liberal politicians who attend a church led by an anti-American fanatic. I better listen to some of those early albums again.

Celebrity endorsements are a tricky thing. They often backfire.

Obama has the support of such far left luminaries as Jane Fonda. All that's missing to seal an Obama defeat in November is the endorsement of the Dixie Chicks.

"In terms of voting behavior, family and significant others are more influential than celebrities in engaging support for a political candidate," says Dr. Natalie Wood, a marketing expert at Saint Joseph's University in Philadelphia whose research on celebrity endorsements was recently published by the Journal of Political Marketing. "At first glance, it would appear that the money and time invested in celebrity support is wasteful."

I love his music and he is way to left for me...but does anyone really care???

I knew he was a libber but until now I didn't know he was a moonbat too...

He's the boss of what? Went to one of his long-overdrawn concerts back in the 90's and I felt like I was literally being punished with extreme boredom! My sister and I left the concert early! He has a few good songs though, certaintly not enough to be the BOSS!
Guess the Jewish community who hasn't been offended by Obama's true feelings are out there to put him in power! Hi Hitler!

Hi Hitler meant are they asking for that. I certaintly have no anti-semitism within me. I love the Jewish people, as I love Jesus, the CHOSEN ONE.