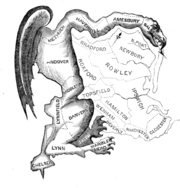 The League of Women Voters of Pennsylvania has joined with several reform groups to help end gerrymandering in Pennsylvania.

That's the practice of incumbent politicians drawing their districts in a certain way so they can stay in office for decades.

Instead of representing a cross-section of residents, the lines are drawn so mostly Republicans or Democrats live in a district under gerrymandering. It's an age-old practice, but Pennsylvania's political class has turned it into an art form.

Gerrymandering is the reason voters can't get rid of political dinosaurs like John Perzel or Bill DeWeese or Mike O'Pake or Dave Argall.

It's one of the biggest obstacles to reforming Pennsylvania government.

Redistricting reform by June is the League's top priority and it has set up a Web site, www.redistrictinggame.org, to help Pennsylvania residents understand what's at stake.

Read more about the League's efforts at its Web site.

Also check out this story in the York Daily Record and this article in The Times-Tribune.