Another Lindsay Lohan train wreck ahead? 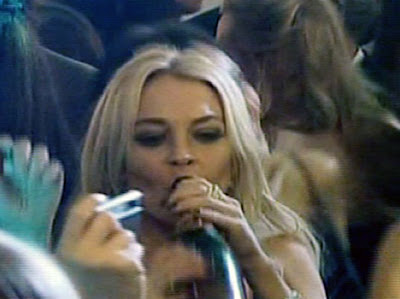 I don't know which is worse. Lindsay Lohan, who has a well-documented drinking problem, ringing in the New Year in Capri, Italy, by guzzling champagne ... or the fact that the 12th Annual Capri Hollywood International Film Festival chose to honor Lohan for her "contribution to cinema."

The photo is an image made from video showing Lohan drinking champagne on New Year's Eve in Capri.

The widely circulated image prompted Lohan's lawyer to issue a statement saying that Lohan is 'back on track' after the setback in her sobriety, according to The Associated Press.

"After being handed a champagne bottle while on a dance floor in Italy on New Year's Eve and drinking from it, the good news is that Lindsay immediately stopped, called her sponsor, and got herself back on track," her attorney, Blair Berk, told the news service. "There is no magic cure here."

"Unfortunately, Lindsay has to share her 'one day at a time' with the entire world," Berk told the AP.

Back on track, you say? It appears she's wandering aimlessly on railroad tracks and that light up ahead is an oncoming train.

The 21-year-old "actress" and notorious party girl pleaded guilty in August to misdemeanor drunken driving and cocaine charges in two arrests earlier in the year, the AP reported.

In addition to serving 84 minutes in jail in November, Lohan also was sentenced to three years' probation, required to complete an 18-month alcohol-education program and spend 30 days in a residential rehabilitation clinic, the wire service reported.