Rendell sticks it to state retirees 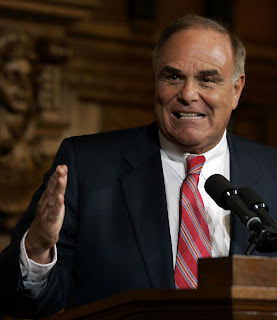 Rendell made the decision to pass the additional costs to state retirees without consulting with the union representing the retirees or the state Legislature. As you can imagine, state retirees are not happy with the governor's arbitrary move.

"We have no choice. This is being shoved down our throats," said William Wise, a state retiree who lives in Limerick and has been working hard in recent weeks to help spread the word about Rendell's decision.

Rendell authorized the changes last year as a cost-cutting measure. I know it's hard to put the words Ed Rendell and saving money in the same sentence.

The move is expected to save the state $94 million a year. That's a drop in the bucket when you consider Pennsylvania government spends $70 billion a year.

No one can deny the cost of providing health care benefits to state workers and retirees has risen dramatically. The state pays $550 million a year for health benefits to retirees alone. That's up from $336 million just four years ago, according to state budget officials.

(Pennsylvania is the nation's third-oldest state, according to U.S. Census Bureau, with one in five residents over the age of 60).

Without any changes to the benefits retired workers are getting, Pennsylvania faces an estimated liability of $14 billion to continue providing health care coverage to its government retirees, according to the Rendell administration.

The new regulations will provide employees who retired before July 1, 2004, with the same reduced benefits as those who retired after that date. That means instead of a $7 co-pay for a 30-day supply of medicine, the new plan will impose three levels of co-pays: $10 for generic drugs; $18 for name-brand drugs on the state's preferred drug list; and $36 for name-brand drugs not on that list.

Medical co-pays will increase from $15 to $25 for visits to specialists and from $25 to $50 for emergency-room visits.

And traditional Medicare coverage will be replaced with a Medicare private fee-for-service plan (for those retirees who qualify for Medicare.) That change is coming on April 1.

It's interesting to note that the changes do not apply to state lawmakers or retired employees of the state Legislature, which has its own top-of-the-line retirement benefits.

There's not much retirees can do about the changes other than gripe about them. A few letters to the editor have appeared in state newspapers. Some retirees have contacted their legislators but have been told lawmakers can't do anything for them since the governor has the authority to reduce the benefits. There have been some scattered protests across the state by the American Federation of State, County and Municipal Employees (AFSCME), but few people have noticed.

Fundamentally, I've always believed that government workers should receive comparable compensation and benefits as those in the private sector. It's hard to get sympathy for your cause when so many fellow Pennsylvanians are in the same predicament or in many cases, have it much worse.

I don't know what the solution is. I guess what really bothers me about the new rules is that Gov. Rendell has increased state spending by $6 billion since he took office in 2003. He's also increased state debt by another $2 billion and the debt could rise to $3 billion before he leaves office.

Rendell loves to spend other people's money. He finds money for inefficient mass transit systems, for sports stadiums and for Hollywood studios that want to film in Pennsylvania. Retired state workers don't matter to Rendell. His attempt to save money on the backs of retired workers seem callus to me.