Thompson bows out, what now for conservatives? 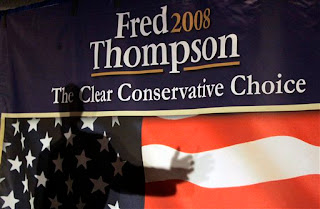 The Washington Post is reporting that Fred Thompson has dropped out of the race for the Republican nomination for president.

Where does that leave conservatives?

Thompson was supposed to be the new Ronald Reagan, the man who could build a conservative coalition similar to what Reagan did.

Only one problem. Somebody forgot to tell Republican voters.

Thompson finished near the bottom of the pack in all the GOP contests so far.

So what's a Reagan conservative to do? There's not much to pick from.

Front-runner John McCain has a checkered past with the McCain-Feingold campaign donation restrictions and the McCain-Kennedy immigration bill and let's not forget that McCain opposed the Bush tax cuts.

Mitt Romney? Are you kidding me? This guy was elected governor in the Socialist Republic of Massachusetts.

Rudy Giuliani? Is he still running? It's hard to get excited about a candidate who draws 3 percent of the vote. And let's not talk about Giuliani's stand on abortion, gun control and same-sex marriage.

Mike Huckabee? Not unless he picks Chuck Norris as his vice presidential running mate.

As I said before, what's a conservative to do?

I could bite the bullet and vote for Mitt, but I am holding out hope for a Giuliani/Thompson ticket. While he had arguably the best platform and ideas, Thompson just didn't have the outward drive and dynamism that Rudy can bring to the top of the ticket...

But can't you see Thompson embarrassing the hell out VP candidate John Edwards in the summer debates?

Giuliani is hardly out of it (assuming he wins in Florida) and I believe a Giuliani/Thompson ticket has the best shot at winning in November.

This country needs serious tax and spending cuts -- and it needs them now.

And is there anyone who doubts Rudy would be a great diplomatic leader and a excellent Commander of Chief of the US Military?

Sadly, it appears that conservatives will most likely stay home come November. I wouldn't doubt that has been the plan as our media's promoted moderates and all but blocked actual conservatives in coverage.

I feel the most conservative of all those in the running was Duncan Hunter. If the country gets lucky, he may end up as a VP candidate. Time will tell.