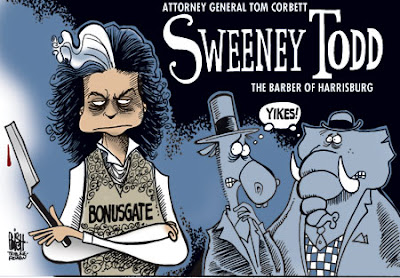 A Lancaster TV channel is reporting that the state Legislature has spent $300,000 so far in legal fees as part of the ongoing "Bonusgate" investigation.

And nobody's been indicted yet. Wait until some current or former lawmakers are facing criminal charges. Imagine the cost Pennsylvania taxpayers will have to incur so their "lawmakers" can defend themselves for breaking the law.

The Pennsylvania Attorney General is looking into allegations that legislative staffers were doing campaign work for their bosses on taxpayers' time.

The focus of the investigation is House Democratic leadership under Majority Leader Bill DeWeese, who authorized millions in "bonus" money for workers, who may have been doing campaign work on your dime.

To investigate if his aides had broken the law, DeWeese has spent $300,000 for lawyers and investigators, according to WGAL Channel 8.

DeWeese has already fired seven of his aides, including his chief of staff, and the Democratic leader is claiming he didn't know that his aides were engaging in illegal activity. Hmmm. Does this remind you of Richard Nixon? I wonder if DeWeese has any tapes he forgot to destroy.