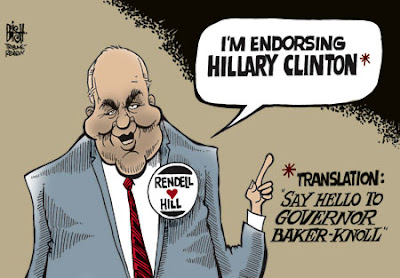 I don't know if the folks at The Pittsburgh Tribune-Review are just having fun with us, but they've raised the prospect of Catherine Baker Knoll, who will be 78 in September, becoming the next governor of Pennsylvania.

Columnist Brad Bumstead opines about the likelihood of Rendell accepting a cabinet post in the Hillary Clinton administration.

"That leaves state government in the hands of his sidekick, Lt. Gov. Catherine Baker Knoll," Bumstead writes. "Let's leave the claim she is incapable of governing to her critics. But "CBK," as she's called, isn't anywhere near as competent as Mark Singel, who filled in for an ill Robert Casey Sr., or a Mark Schweiker, who took over for Tom Ridge when he became the first head of the federal Department of Homeland Security. "

There's no doubt that Knoll is experienced in the ways of Harrisburg, having served two terms as state treasurer and two terms as lieutenant governor, but she will be 78 and she's already referred Gov. Rendell as "Edward G. Robinson" when she introduced him for a speech during his first term.