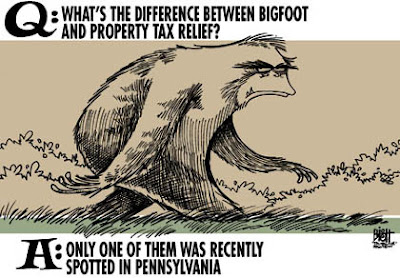 If you blinked, you may have missed it.

The hardest-working state legislature in the country debated property tax relief for a few hours this week and then decided to take another vacation.

The Pennsylvania House convened Monday for an hour after a 30-day holiday break. The House met again for an hour on Tuesday and then settled into marathon seven-hour session on Wednesday. On Thursday, the House convened for another three hours and then decided to take a vacation.

In honor of Martin Luther King Jr. Day on Monday, the House adjourned until Jan. 28.

You can thank House Majority Leader Bill DeWeese, D-Greene, for ending the tax relief debate before it began. Unable to get the votes he needed to push through some of the bogus tax relief bills the Democrats supported, DeWeese did what he always does — punt.

What monumental legislation was approved after those grueling 12 hours this week?

The amendment would allow the Legislature to eliminate residential property taxes while keeping taxes in place for businesses and other commercial properties.

This is pretty much all the most expensive state legislature in the country could accomplish despite the fact that most Pennsylvania residents keep telling their lawmakers that property tax relief is the most pressing issue facing the state.

Another bill that passed the House this week gives tax breaks to low-income residents (something the Democrats wanted) while cutting the state's personal income tax by one billion dollars (a move pushed by Republicans.) But none of this will happen unless the Senate and Gov. Rendell also agree.

DeWeese promised to take up property tax relief again on Jan. 28, but he's made many promises before. House Bill 1275, which would eliminate school property taxes for all Pennsylvania homeowners, may or may not be on the agenda when the House returns. That's up to DeWeese ... or your local legislator if you make sure they get the message that their job is on the line.

In case you were planning to spend that future property tax cut, keep in mind that the constitutional amendment needs to pass the Senate and then must be brought back for another round of approvals by the next Legislature in the 2009-10 session. Then it goes to voters for a referendum the following year.

In other words, many senior citizens banking on a property tax reduction, or better yet, the elimination of school property taxes, will have to wait another two or three years. (It's been nearly four years since Rendell signed the slots bill into law and nobody has seen a cent of that money yet.)

So this is the best that DeWeese and the Democrats who control the House could do this week — after 12 hours of debate on the House floor. Those 12 hours also represent how long the House has been in session for the month of January.

In other words, the House agreed to put off eliminating school property taxes until tomorrow or the next day or the day after that. It's the same runaround politicians have been giving taxpayers for decades.

"It's a borderline joke is what it is," Rep. Will Gabig, R-Cumberland, told the Associated Press. "It will do nothing. It will not reduce property taxes by one dollar. It will not change the system at all."

All 203 members of the House and half the members of the state Senate are up for re-election this year. The starting salary of a Pennsylvania lawmaker is $76,163.

The primary election, the first opportunity to get rid of some of these legislators, is April 22. Find out about running for office at the Department of State Web site.

In my opinion the legislature may not have a choice in approving HB 1275. Personal Property Taxes, as they are assessed in Pennsylvania, are illegal because they are in violation of the 13th Amendment of the U.S. Constitution, specifically having to do with Involuntary Servitude.

The legal definition of "Involuntary Servitude" is as follows: A condition of compulsory service or labor performed by one person, against his will, for the benefit of another person due to force, threats, intimidation or other similar means of coercion (legal) and compulsion directed against him.

Personal Property Taxes must be paid by a homeowner to a school district. That person may not have a child in the school. Therefore, they are paying for the benefit of another person.

If that homeowner does not have the means to pay the property tax, they are left with only three alternatives. Sell their house, not pay the tax and have the home foreclosed on or find work to enable them to pay the taxes. Having a home foreclosed is legal coercion. If they must seek work, then due to the legal corcercion they become subject to Involuntary Servititude to the school district.

Since renters do not pay Personal Property Tax and may have children in school they are receiving the benefit of homeowners.