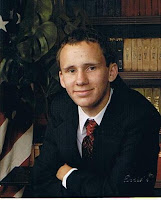 If elections were won with enthusiasm alone, Scott Thomas has a brilliant career in politics ahead of him.

Thomas, a senior at Pottsville Area High School in Schuylkill County, is planning to run for the Republican State Committee in Pennsylvania.

I bet most high school seniors couldn't name one of the candidates running for president let alone tell you what a state committee does.

Did I mention that Thomas isn't old enough to vote yet?

Although he doesn't turn 18 until Jan. 25, Thomas has built an impressive political resume so far. He serves as chairman of the Pennsylvania Teenage Republicans, and was the founder and chairperson of the Pottsville (now Schuylkill County) Teenage Republicans.

He has helped candidates for Republican office in local, state and federal campaigns.

"I have very much enjoyed my time and experiences in the political arena," Thomas stated in a press release. "I now feel that I can bring my energy and enthusiasm for politics to the state party. I have enjoyed getting young people involved in the process, and I have thoroughly enjoyed working with candidates that share the Republican vision of good government."

After high school, Thomas plans to attend Lehigh Carbon Community College in the fall. He is considering a career in education or politics.

"I am asking all the Republican voters of Schuylkill County to give me the opportunity to serve them on the State Committee. I need your support and encouragement, and I especially need your vote on April 22nd. I will be honored to serve, and I will do all I can to make you proud of me as your committee member."

Thomas is serious about the upcoming campaign, already setting up a campaign committee and has received coverage in his hometown newspaper.

Oh boy! Just what America needs...yet another young Republican fighting the war on terror right here at home by going to college and getting involved in GOP politics. I'm sure the guys on their 5th and 6th tour of duty in Iraq will be so thrilled, not to mention the homeless veterans.

At the lease kid is getting involved and taking the initiative!! He's not waiting in the welfare line to sign up when he turns 18!!

How very Michael Smerconish of him....

Great to meet you on Friday night at RSC. Best of luck in your race!