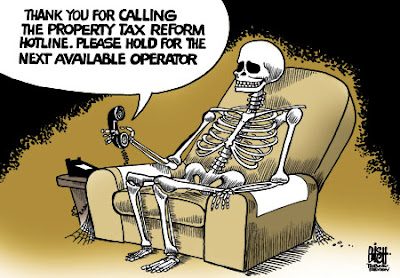 It's been nearly four years since Gov. Ed Rendell and the Pennsylvania Legislature promised state taxpayers would hit the jackpot once casino gambling was approved.

The governor dangled the prospect of property tax cuts in front of reluctant legislators to get the votes he needed to bring 51,000 slot machines to the Keystone State.

Was it worth it? You be the judge. Go to the governor's Web site, http://www.governor.state.pa.us and click on the button that says "Property Tax Relief" to review a spread sheet that predicts how much residents in each of the state's 501 school districts can expect in property tax cuts.

For me, it's somewhere between $120 and $302, depending on how much the casinos take in this year. Let's play it safe and stay with the minimum number.

Four years after Rendell promised "historic property tax relief," I get back $120 on my school taxes! I'm paying $500 more in school taxes today than four years ago. I'm already in the hole and I still don't have my check from Rendell.

There was a lot of talk last week in the state Legislature about property tax relief when lawmakers returned to Harrisburg after a 30-day holiday break. The Legislature adjourned after four days and politicians started cranking out press releases about the wonderful job they did on property taxes.

What exactly did the Legislature do? The House voted unanimously to amend the state constitution to allow lawmakers to revisit the property tax issue down the road. That's it.

You can thank House Majority Leader Bill DeWeese, D-Greene, for ending the tax relief debate before it began. Unable to get the votes he needed to push through some of the bogus tax relief bills the Democrats supported, DeWeese did what he always does — punt.

Before adjourning until Jan. 28, what monumental legislation was approved after those grueling 12 hours that the House was in session last week?

The amendment would allow the Legislature to eliminate residential property taxes while keeping taxes in place for businesses and other commercial properties.

"It's a borderline joke is what it is," Rep. Will Gabig, R-Cumberland, told the Associated Press. "It will do nothing. It will not reduce property taxes by one dollar. It will not change the system at all."

Another bill that passed the House last week would provide tax breaks to low-income residents (something the Democrats wanted) while cutting the state's personal income tax by $1 billion (a move pushed by Republicans.) But none of this will happen unless the Senate and Gov. Rendell agree and that's not likely going to happen until Rendell unveils his 2008-09 budget in February.

DeWeese promised to take up property tax relief again on Jan. 28, but he's made many promises before. House Bill 1275, which would eliminate school property taxes for all Pennsylvania homeowners, may or may not be on the agenda when the House returns. That's up to DeWeese ... or your local legislator if you make sure they get the message that their job is on the line.

In case you were planning to spend that future property tax cut, keep in mind that the constitutional amendment needs to pass the Senate and then must be brought back for another round of approvals by the next Legislature in the 2009-10 session. Then it goes to voters for a referendum the following year.

In other words, homeowners counting on a significant property tax reform, or better yet, the elimination of school property taxes, will have to wait another three or four years. (Keep in mind that Rendell kept shuffling the deck on us for the past four years for a measly $120.)

The political class that populates Harrisburg did what it always does, put on a show for the voters back home but avoid making any decision. It's the same song-and-dance professional politicians have been giving taxpayers for decades.

You can wait by your mailbox for that property tax cut check to arrive or you can go to the polls on April 22 and vote out every politician who thinks $120 is property tax relief.