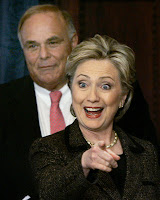 The Dream Team or Our Long National Nightmare? You be the judge.

Is this the 2008 Democratic presidential ticket of Sen. Hillary Clinton and Gov. Ed Rendell as vice president?

After all the damage Rendell has done to Pennsylvania over the past five years, do we really want to unleash him on the rest of the country?

Rendell endorsed Clinton Wednesday at a press conference in Philadelphia. Yawn. That might get her two more votes in Pennsylvania -- Ed and Midge Rendell.