A little payback for Jim Matthews 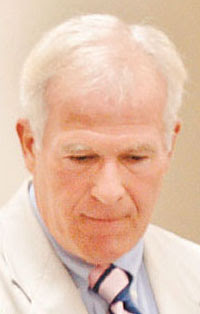 Montgomery County Commissioners' Chairman James R. Matthews has been ousted from the county's Republican Party Executive Committee as punishment for what some GOP officials have termed "his deal with the devil."

That bit of news comes from Margaret Gibbons, who has covered Montgomery County politics for decades.

The party's 50-member Executive Committee tossed out Matthews by a voice vote after Party Chairman Ken Davis failed to remove Matthews, a close ally of Davis.

Davis put the matter to a vote. Gibbons says the vote was not even close, with most voting to oust Matthews, according to one source who attended the closed session.

That shows you how out of touch Davis is with the rest of the rest of the party leadership. Davis will soon be ousted as party chairman and his close ally, Bob Asher, may be in trouble with GOP bigwigs who are embarrassed to have a GOP National Committeeman making deals with Democrats.

The once-dominant Republican Party in Montgomery County has been on a death march since Ken Davis and Bob Asher took over control of the party.

Many Republicans, including some who had considered themselves Matthews supporters, are irate with the unprecedented power-sharing deal he forged with newly elected Democratic Commissioner Joe Hoeffel, according to Gibbons.