Prison guard who posed in Playboy gets her job back 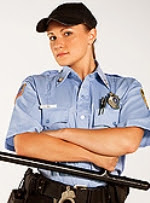 You have to hand it to Heather Hull. The woman loves her job as a prison guard. Why else would she go through all the trouble to get her $41,000 a year job back after she was fired last April after the warden found out that Ms. Hull had posed in Playboy magazine.

It's not as bad as it sounds. The 29-year-old corrections officer (and aspiring model) was wearing clothes (a sexy, albeit fake prison guard uniform) when she appeared in the March 2007 issue of the magazine.

OK, it was probably more revealing than you'd want the inmates to see.

But I still don't get why inmates get the privilege of having Playboy magazine delivered to their cells.

Anyway, Ms. Hull was reinstated to her former position with the Berks County Prison, according to the Reading Eagle.

Ms. Hull worked with her union to get her job back. The case went to arbitration and the hearing officer recommended Ms. Hull be reinstated.

Although she's back guarding prisoners as of last week, Ms. Hull told the newspaper she was disappointed that she was not awarded back pay for the time she was out of work.

Arbitrator Charles Long said Hull did not besmirch the county's reputation by posing in a simulated correctional officer's uniform, according to the newspaper.

Long, however, said that Hull lacked good moral judgment when deciding to pose for the magazine, adding that correctional officers are held to a higher standard than average citizens, the newspaper said.

(Photo courtesy of Playboy Magazine © 2007 by Playboy. That's the first image used in the magazine. A second photo of Ms. Hull with her shirt open exposing her bustier is the one that probably got her into trouble with the warden.)