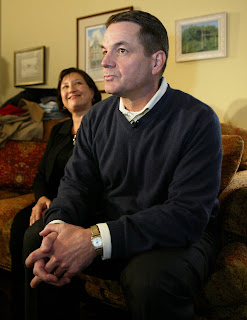 The Marines may come to the rescue of the Republican Party in 2008.

The GOP is fighting back in 2008 and using the same strategy against Democrats, at least when it comes to finding candidates with a military background. In the 7th Congressional District, a decorated Marine and Gulf War veteran, Wendell C. Williams, will challenge Democrat Rep. Joe Sestak.

In another suburban Philadelphia district, the 8th District, the father of a Marine killed in Iraq will attempt to unseat Rep. Patrick Murphy, the only Iraq war veteran in Congress.

Murphy barely defeated incumbent Mike Fitzpatrick in 2006 and like most of the freshman Democrats elected to Congress, has made a negligible difference for the folks back home. Murphy has failed to deliver on almost all of his campaign promises.

Enter Thomas Manion, a Republican who recently retired as a colonel in the Marine Reserves.

Manion will make Murphy's "cut-and-run" strategy on Iraq a key issue in the campaign.

"I've learned that if you want to make something happen, you've got to get out on the playing field," Manion told the Associated Press.

Murphy, who is 34 but looks like he's 24, served as a military lawyer in Iraq with the 82nd Airborne Division.

Manion, 53, is a pharmaceutical executive so he not only brings military experience, but a background in the business world.

While he would like to see the war in Iraq end and U.S. troops return home, that can't happen until the job is finished, Manion told the wire service.

"My son was about this country, so I'm sure he'd be very proud that I'm stepping forward and stepping on the field, as he was, to try to make a difference for our country," Manion said.

Murphy was a lawyer before he was elected to Congress, as if we need more lawyers in Congress.

That's Thomas Manion, right, listening to a question from members of the news media after making the announcement in Doylestown Pa., he will run for the Pennsylvania House seat. Manion, a Republican who recently retired as a colonel in the Marine Reserves, is unhappy with positions Rep. Patrick Murphy, D-Pa., has taken against the war. (AP Photo/Joseph Kaczmarek)

...as if we need pharmaceutical execs in Congress.

No, a-nony-mouse, we need more Marines in Congress. Maybe more guts and less pacifism will get terrorists out of our hair!

you guys are so desperate for some buzz...Murphy will be back and so will Sestak...those districts showed, clearly, that they do not trust republicans. The republicans are trying to go the military route this year, but their a day late and a dollar short to cash in on that. This year, once again, after years of failed Bush policy, "it's the economu stupid."

Kick out the tax and spend Liberal Democrats. Vote for Tom Manion!