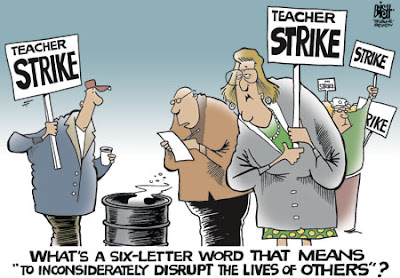 Pennsylvania continues to lead the nation in teacher strikes and that trend is not about the change any time soon.

In other words, don't expect to see action on the Strike Free Education Act, which would ban teacher strikes in Pennsylvania. Across the country, 37 states have already banned teacher strikes.

The Pittsburgh Tribune-Review reports that a strike ban in unlikely because the teachers' union is too powerful. (The union is also one of the biggest contributors to incumbent lawmakers.)

"We see a strike as a basic right to withhold work to achieve fair compensation. A strike ban would hand all the power to the school board," PSEA President James Testerman told the newspaper.

Does anybody care about the thousands of students who are incovenienced by strikes? How about the parents who have to leave their jobs and find day care for the kids?

The teachers don't lose anything. They get paid for the time they're on the picket line.

Read more about the effort to ban teacher strikes in Pennsylvania at http://www.stopteacherstrikes.org/

Also check out an interesting post at PAWatercooler about the strong-arm tactics the teachers' union uses to get its way over school boards and administrators. And that usually ends up sticking it to taxpayers where it hurts -- in the wallet.

"Teacher unions across the state hold the public hostage using laws that give their members an unfair advantage of the taxpayers footing their manifestly lavish compensation," according to PaWatercooler. "If this weren't government-sanctioned we would call it racketeering and would expect a grand jury to be investigating the cartel perpetrating it."

Another blogger, PA Pundit, weighs in on the fact that Pennsylvania is one of just 13 states that allow teachers to strike and offers some insights into how a Chester County school district was pressured by the threat of a teacher strike earlier this month.

"Parents are afraid to oppose the union in public because the union's members control the lives of their children 180 days a year, as well as grades and recommendations that determine their children's future," states PA Pundit. "Parents are also held hostage because they are on the hook for contingent daycare expenses in the event that teachers do choose to strike. The pressure to mollify the teachers is both one-sided and overwhelming."

Finally, don't forget that this is an election year for 203 members of the Pennsylvania House and 25 members of the Pennsylvania Senate. Your legislators can take tons of cash from the teachers' union to hide under their desks when the issue of banning teacher strikes comes up. But if you vote them out of office this April or November, the money from the teachers' union won't matter, will it?

The Pennsylvania State Education Association created an environment where their members have the highest average teacher salaries in the nation, but the SAT test scores of the state's students are one of the lowest.

The politicians at the local and state level just wink at this malaise. It is easier to accept special interest money than to improve education.

There is nothing like voting elected officals out of office to send a message to the good old boy network.

The only way to attain fair compensation is to allow free market forces to operate. I would like to see mandatory public education ended and allow parents and/or students to choose the school and type of education they want. Education is valuable only if it serves the needs of those who value it. By removing the hand of government and allowing competition, education would dramatically improve. Of course the consumer will pay for it, not tax dollars, but think of the tax savings! Teachers would be free to strike all they wanted, but at their own expense.