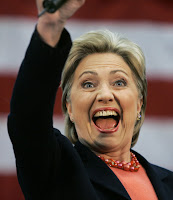 Bob Parks, writing at The New Media Journal.us points out some discrepancies in Hillary Rodham Clinton's position on the Iraq War.

I think Hillary is falling into the John Kerry flip-flop trap: I was against the war when I voted for the funding ..."

"To think that the Democrat anti-war strategy has now evolved into one that moved from "The war is lost" to "I think what is motivating the Iraqi government is the debate in the political campaign here" is a glaring example of Clinton (and liberal) narcissism," Parks writes.

"The mainstream media may give her a pass because they are like-minded, but that game will not be played here.

The Democrat Party, through their anti-war, defeatist rhetoric, emboldened the enemy, thus costing many of our soldiers and Iraqi civilians their lives. Hillary Clinton will not be allowed to re-write history."