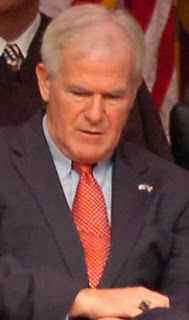 Pariah: An outcast. Any person that is generally despised or avoided.

Jim Matthews, the Republican turncoat who made a power-sharing deal with Democrat Joe Hoeffel, is being shunned in Montgomery County GOP circles, according to the Philadelphia Inquirer. (I thought only the Amish were into shunning.)

I said this months ago. Matthews might as well change his registration to Democrat and stop pretending he's a Republican. No self-respecting Republican wants to be in the same room as Matthews, who turned his back on 85,000 voters who elected a GOP majority of Bruce Castor and Matthews in November.

Hoeffel has used his new-found power to hire political cronies to lucrative county jobs. This is the same Joe Hoeffel who criticized the GOP-controlled commissioners' board in 2007 for political patronage. (I guess it's different when you get to hire your friends, Joe.)

Although Matthews has been kicked off the 50-member Montgomery County Republican Party Executive Committee, there's not much else GOP leaders can do to punish him ... other than avoiding him.

"Shunning is the only option available to us," GOP Committeeman Brian Miles told the newspaper. "You hope Jim comes to his senses and realizes the devastating impact this will have on the Republican Party in Montgomery County."

Here's a prediction. Matthews will find himself further isolated when the county party ousts current Chairman Ken Davis, a longtime Matthews ally. There's also a movement to remove Bob Asher from his post as a Republican National Committeeman. Asher is the money behind Matthews.

Matthews' only option then is to come crawling back to Bruce Castor for help in putting the megalomaniac Hoeffel in check.

Jim Matthews is the lowest of the low. When will this GOP get rid of Ken Davis and the boobs at MCRC. Tom Ellis and Jim Matthews did some great things for the county. The problem is that Tom Eliis was the "bright one". Jim Matthews is not as bright as Joe H. And he says Bruce C. has an ego. What an inflated view of himself he mst have. What an idiot!