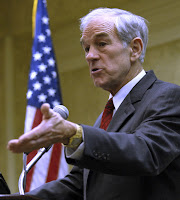 Something tells me this wasn't the result the Berks County Republican Party had in mind.

About 200 Berks County Republicans gathered this week to "caucus" on a potential presidential nominee.

The unofficial gathering came three months before voters get to actually pick their party nominee for president, but there's not much to do in Berks County in January, so why not get a bunch of people together and pretend to vote.

The results were a bit ... surprising.

Ron Paul, the Texas congressman, won the straw poll. That either means Ron Paul supporters packed the meeting or Berks County conservatives are having a hard time with the current GOP field.

The vote was all over the place.

Rep. Paul received 61 of the 193 votes cast during the informal presidential caucus, reports Mary Young of the
Reading Eagle

The event was well attended for a January evening at the Lessport Farmers Market with about 300 party faithful braving bitterly cold temperatures to participate in the straw poll and help the GOP get organized.

Mitt Romney finished second, another surprise considering Berks County Republicans are on the conservative side.

According to the newspaper, the other candidates and their totals, were:

"Fully half of those standing in the room had never been to a GOP event before," Gillen told the newspaper. "For the first time in their political lives they had the opportunity to have input into a public presentation about the candidate of their choice."

"with about 300 party faithful braving cold temperatures to particiapate..."
Then Mark Gillen says that fully half of those in attendance had never been to a GOP event before. That doesn't sound like "party faithful" to me. Paul won because his faithful tried to pack the event with their fellow moonbats. Gillen saying this was a success is as ridiculous as it is naive. This made the Berks GOP a laughing stock.

Actually, the Paul vote was exactly the result anticipated.

No, Russ, the thing that makes the Berks GOP a laughingstock is a 9 trillion dollar debt, a needless bloody mess in Iraq, "No Child Left Alone", and the cancellation of the Bill of Rights.

How did that Democrat kool-aide taste, Jim? Wow! The Berks GOP is responsible for all those things? Who woulda thought... I kind of remember the Democrats voting for all the legislation that has led to the issues you cite. I guess revising history is better than learning from it...

Yes, I remember that, too. Those were the good old days, when the Democrats had opposition from the GOP rather than support.

OK - Ron Paul won, as he has MANY straw polls. Does anyone have the hootspa to report the REAL news, or are we just a bunch of sheeple who are TOLD who are candidates are? PS - I'm a Ron Paul supporter and MY PSYCHIATRIC PATIENTS are MOONBATS, If you call excitement about a candidate, moonbats - well I feel sorry for you. Maybe you should find a real candidate to get excited about too; put your energy to GOOD use instead of attacking Ron Paul supporters. Do something productive with your life...and support him before America goes belly up.