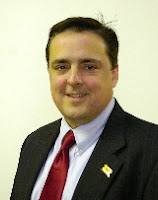 The Reading Eagle is reporting that a Republican from Lehigh County is seeking the GOP nomination to replace Rep. Carl Mantz, who is giving up the 187th state House seat after one term.

The 187th District covers parts of Lehigh and Berks County. It was held by Republican Paul Semmel for years, but Semmel made the mistake of voting for the July 2005 pay raise, taking the money and then defending the middle-of-the-night pay grab.

That opened the door for Mantz to step in as a reform candidate. But after one year in Harrisburg, Mantz called it quits. He'll finish his term, but doesn't want to return to the Capitol after 2008.

Enter Gary Day of Heidelberg Township, Lehigh County. The 41-year-old has already quit his job with Service Electric Cablevision to concentrate full time on winning a seat in the state Legislature.

The three main issues Day is running on, according to the newspaper, are: open space preservation, fiscal concerns and health care.

"This district, whether you're in Longswamp Township or Heidelberg Township in Lehigh County, has a similar rural character," Day told the Reading Eagle. "Most of the people in the district of any party are here for a reason — that’s to preserve the rural character."

Day wants to slow down state spending and push for tax reform.

"It would be very hard for me to vote for tax increases," Day told the newspaper. You better believe voters in the 187th District will hold Day to that pledge if he makes it to Harrisburg.

Day told reporter Mary Young that he favors House Bill 1275, introduced by Rep. Samuel E. Rohrer, R-Berks, although he has some questions about the plan to eliminate property taxes.

If miracles happens, the Legislature will approve HB 1275 before Day gets to Harrisburg.

Archie Follweiler, a Kutztown Realtor who lost to Mantz in the November 2006 election, is planning to run for the 187th House seat on the Democratic ticket.