What's another word for DeWeese? 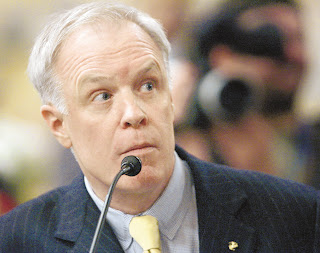 What's another word for DeWeese? How about corrupt, incompetent, ineffective?

DeWeese's ineptitude in leading the House will erase the Democrats 1-vote majority and usher in Republican control after the 2008 elections, according to Gleason.

(I guess Gleason forgot to mention that DeWeese's fall could be also compared to Republican Speaker John Perzel's incompetence throughout 2005 and 2006, which lead to the Democrats taking over majority control of the House after 12 years of GOP dominance.)

Corrupt, Incompetent, and Ineffective are just a few words that sum up the Democrats first year back in control of the State House

HARRISBURG — Republican Party of Pennsylvania Chairman Robert A. Gleason, Jr. was not surprised by the lack of guidance and leadership House Majority Leader Bill DeWeese displayed last year. Chairman Gleason believes Mr. DeWeese's inability to handle the most important issues facing the state will usher in a new Republican majority next year.

"Pennsylvania House Democrats are back in Harrisburg this week to begin the second year of their political campaign reminding Pennsylvanians why they need Republican leadership in the State House," Gleason said. "Just one year ago, House Majority Leader Bill DeWeese depicted his caucus as the agents of reform and change in Harrisburg. However, they have proven to be much more talk than action on reform, making the cloud of impropriety that has formed over the State Capitol murkier during Democrat control.

"The Democrat majority in the House has failed to deliver on two of the Commonwealth's most pressing issues, property tax relief and government reform initiatives. In 2006, Pennsylvanians far and wide demanded that the state government pass real property tax reform and government reforms. After one year in control of the House, Democrats have continually failed to deliver on either of these two issues.

"The property tax relief plan that House Democrats introduced today is more of the same. Instead of looking to cut fat out of the budget, Democrats continue to focus on plans that create, increase, and shift existing taxes. Despite the laughable notion that he is a 'reformer', House Majority Leader Bill DeWeese drug his feet on getting a vote on open records legislation, too late to get it to the Governor's desk by the end of the year. This bill would have served as the first step towards increasing government transparency, allowing the public to better see how their hard-earned tax dollars are being spent.

"Thankfully our strong Republican leadership in the state Senate and House has been able to hold off Gov. Rendell and the Democrat Legislature's tax and spend agenda. While Democrats in Harrisburg continue to seek ways to fund programs like taxpayer-funded socialized health care, Republicans are seeking ways to cut the personal income tax. The differences are clear. Democrats continue to seek ways to raise your taxes, while Republicans are working to enact real changes that will allow you to keep more of your hard-earned money where it belongs – your bank account!"