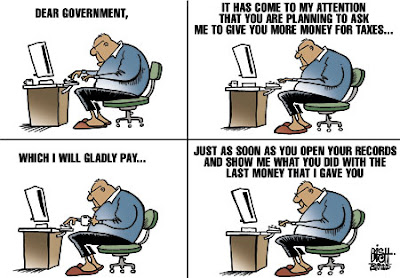 From today's edition of The Mercury comes this editorial on more waste in Harrisburg:

THORNS to the state Legislature for neglecting to update tax laws that could save as much as $237 million a year in funds lost to inefficiency. According to a report in The Harrisburg Patriot-News, tax money is lost every year across Pennsylvania, due to an outdated local wage tax-collection system. An analysis by the nonprofit Pennsylvania Economy League of Southwestern Pennsylvania showed that 11 cents is "lost" for every dollar collected in local wage taxes across Pennsylvania. Some employers don't collect the tax, some employees report less than they earn, some tax collectors never forward the money to other regional tax collectors, all of which result in lost money, the report stated. The Legislature is expected to update the 1965 local tax laws this year. It would have been nice if they hadn't waited 42 years.

The other sad part of this latest fiasco is that it took an outside group, the nonprofit Pennsylvania Economy League of Southwestern Pennsylvania, to figure out that the state couldn't account for the money.

You can read the original story on The Patriot News Web site.