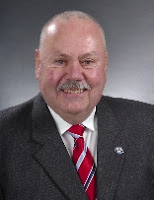 Mackey ran against Argall in 2006 but could not oust the 22-year veteran even though Argall supported the infamous July 2005 legislative pay raise.

Not much has changed in the past two years in terms of the need to clean up the mess in Harrisburg, according to Mackey, a retired pipe fitter from Scuylkill County.

"Our state government is at a low point," Mackey told the Reading Eagle. "We need to restore integrity. That's my motto."

Unlike my Kool Aid drinking friends on the left who keep supporting do-nothing Democrats for re-election, I welcome reformers from both parties.

Mackey sounds like a genuine reformer. Argall, a longtime member of the Republican leadership, is part of the problem in Harrisburg.

The 124th District covers parts of Berks and Schuylkill counties.