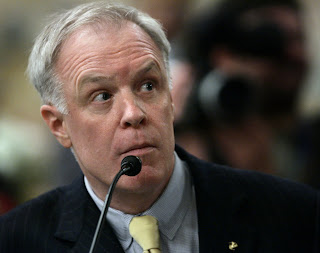 His name is H. William DeWeese, Democratic Majority Leader in the state House of Representatives.

The ouster of DeWeese would open the flood gate for many of the reforms needed to improve Pennsylvania government.

DeWeese is the last of the dinosaurs who have blocked the passage of meaningful legislation for decades.

Pennsylvania voters got rid of the No. 1 and No. 2 Republican leaders in the state Senate in 2006 by voting out David "Chip" Brightbill and Robert Jubelirer. Voters also knocked off the No. 2 leader of the Democrats in the House, Mike Veon.

The No. 1 Republican in the House, John Perzel, won re-election from his gerrymandered home district, but was ousted from the powerful post as Speaker of the House (with the help of reform-minded Republicans).

The only "leader" who survived was Bill DeWeese, who has spend the past 32 years in Harrisburg.

The ouster of DeWeese is a top priority for anyone who wants to see an end to the status quo politics of Harrisburg. DeWeese is the main stumbling block to reforming the Legislature. He must go.

For that to happen, we need to rely on the voters of the 50th House District in Greene, Fayette and Washington counties. Tainted by the 2005 pay raise scandal, DeWeese barely won re-election in 2006. He defeated Republican Greg Hopkins by a mere 1,041 votes despite outspending Hopkins by a huge margin. DeWeese even lost his home county of Greene.

DeWeese is now embroiled in one of the biggest corruption scandals in Pennsylvania history. Despite his tainted reputation and inability to show any leadership in the House, DeWeese vows to stay as House Majority Leader for the rest of 2008 and seek re-election to his House seat.

A grand jury is investigating millions of dollars in bonuses given to legislative staffers. DeWeese has already fired seven of his staff members who have been linked to the so-called "Bonusgate" investigation. Attorney General Tom Corbett is looking into whether the bonuses were illegally tied to work performed on political campaigns.