Where does Hillary Clinton get her money? 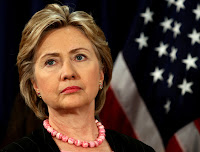 In case you haven't figured it out yet, I will NOT be voting for Hillary Clinton for president in 2008. I don't care who else is running, I will vote for "anybody but Hillary."

If you still can't figure out why Hillary is not getting my vote, spend some time at The Hillary Project Web site, which had been reporting for years on news about the Clintons that the mainstream media is afraid to touch. Unlike so many Democrats, I do not suffer from amnesia about the Clinton years, a time of massive corruption, cronyism and law-breaking in the White House and appeasement of our enemies abroad.

If you're still not sure about whether Hillary Clinton is fit to become our next president, check out this editorial in the Pittsburgh Tribune-Review about where Hillary Clinton is getting some of her campaign money to finance her run for the White House.

The editorial points out that Mrs. Clinton received $45,000 donations from six different members of one family. The father of the San Fransisco family reported annual income of $49,000. Makes you wonder how the miracle of donating $200,000 to the Clinton campaign occurred, doesn't it.

This is a must read. Do Democrats really want this unscrupulous woman representing their party? If you think the Bush administration has had ethical lapses, wait until the Clintons get back in the White House.

And it's not just Hillary Clinton who took campaign contributions from questionable sources. None other than Edward G. Rendell, governor of Pennsylvania, has been implicated in the growing scandal.

The Morning Call in Allentown reported today that Rendell has no intention of returning a $40,000 donation from Norman Hsu.

Reporter John Micek quotes Rendell as saying Norman Hsu "gave me that money legally. He hasn't been convicted of anything … We'll see what the court system does. If the court sustains it, we'll give it back."