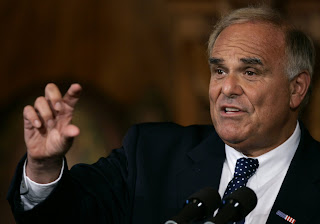 There's a fascinating analysis on The Allegheny Institutes' Web site about how Gov. Ed Rendell's administration routinely spins employment numbers to make it look like Pennsylvania's job climate is improving.

"Each of these assertions is so easily debunked, it is almost embarrassing to do it," Haulk states in his policy brief. "However, since this was an official statement and some may find its assertions credible, debunking is necessary."

By the way, the caption under the photo to the right could read, "Only about this much of what I say is true."

The Allegheny Institute for Public Policy bills itself as the "nation's first think tank devoted exclusively to bringing free-market solutions to local government."

Who do you believe? Ed Rendell, who has repeatedly lied to Pennsylvania residents about property tax relief or the leading independent public policy research groups in the state? I think I'll go with The Allegheny Institute and the Pennsylvania Manufacturers' Association and the Commonwealth Foundation and the Lincoln Institute on this one.