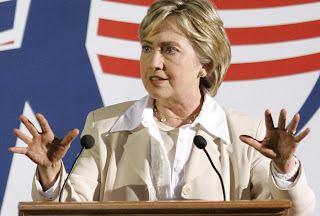 Here's the latest on the growing scandal involving the fugitive from California who is a big-time Democratic Party fundraiser.

Hillary Clinton is returning $40,000 linked to Norman Hsu and trying to spin her way out of this mess by saying she gets so much money from so many people, it's hard to keep track of it. I can sympathise with Hillary. It's hard to account for that $52 million. Some of it may come from shady characters pardoned by her husband. That's just the Clinton way. Read more about Hill's Problem of Outsourcing Campaign Fundraising at The Hillary Project Web site.

Then there's the matter of campaign contributions from Mr. Hsu to Gov. Edward G. Rendell and U.S. Congressman Joe Sestak, a freshman from Delaware County. We're still waiting to see if these two will return the tainted money.

Republican Party of Chairman Robert A. Gleason Jr. has called on Rendell to give back any contributions received from Hsu. Rendell got an estimated $40,000 in donations from Hsu. "Gov. Ed Rendell should not be using illegal money to help get Democrats elected," Gleason said. "The governor continues to hold on tight to the tainted money although Hsu pleaded no contest to the charge of grand theft. I believe that to be a clear admission of guilt."

John Micek of The Morning Call in Allentown has an update on Rendell's refusal (so far) to give the money back. Check out his blog at Capitol Ideas.

Evan Rendell's official house newspaper, The Philadelphia Inquirer, is concerned about the governor's latest ethical lapse, running a story on its front page today saying Rendell will keep the suspect donations. Rendell should fit right in with a Clinton administration in 2008.

It's fascinating all the left-wing bloggers ignoring the growing Hillary Clinton scandal, choosing instead to focus on a Republican senator caught playing footsie under a men's room stall. Now that's a scandal, not how the nation's likely next president is financing her campaign with dirty money.