Mayoral candidate 'lucky' to be alive 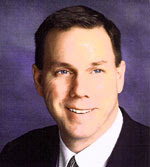 In his first interview since being critically injured in a 20-foot fall onto concrete, Reading School Board President Keith R. Stamm told his hometown newspaper he was "really lucky" to have survived the work-related accident.

Speaking to reporter David Mekeel of the Reading Eagle from Reading Hospital and Medical Center, Stamm, who is also running for mayor of Reading, said he doesn't remember much about the accident.

The 51-year-old Stamm broke both shoulder blades, his collar bone and several ribs as well as puncturing a lung when he plunged at least 20 feet onto concrete on Aug. 17, according to the newspaper.

Stamm spent the next five days in the intensive care unit at Reading Hospital before being moved into a rehabilitation wing, Stamm told Mekeel.

The fall took while Stamm was on a maintenance call for Fluidics, a Philadelphia company where Stamm has been working at since January, the newspaper said. Stamm told the newspaper that was working on the heating and cooling system at the Meridian Building when he fell while closing a hatch on the building roof.

Stamm is attempting to unseat incumbent Democratic Mayor Tom McMahon, who barely won his party’s nomination in a crowded primary field in May.

McMahon, master of the photo opportunity but a mayor of little substance, doesn't have to show for his past four years as mayor of Reading, which is experiencing a variety of problems, including violent crime, trash dumping and deteriorating infrastructure.

Stamm told the Reading Eagle that he participated in a Reading School Board meeting via telephone last week and plans to continue campaigning for mayor when his is physically able.

The timing of the accident couldn't be worse for Stamm, who was offering Reading residents a credible alternative to McMahon.

Stamm has been blogging at Keith Stamm, School Director since January 2005, but hasn’t posted any new entries since the week before the accident.