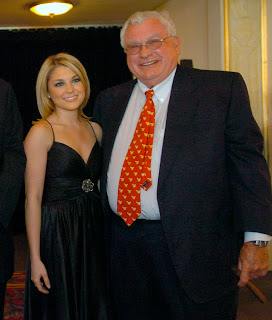 I really thought the marriage was going to last. The couple had so much in common.

84 Lumber founder Joe Hardy, who happens to be 84 years old, has filed for divorce from his third wife, 23-year-old Kristin Georgi.
The marriage lasted just four months.
This is big news in Western Pennsylvania, where Hardy, the founder of 84 Lumber, is the closest thing to celebrity this side of Lynn Swann.
According to The Associated Press, it was Hardy who filed a divorce petition Monday in Fayette County, citing "irreconcilable differences."
Maybe it was the nearly six decades in age difference that pulled the honeymooners apart, but then again, the couple looked happy in this April 2007 photo just before they exchanged vows.
Here's some other tidbits from the Associated Press:
Hardy, a flamboyant philanthropist who also serves as a Republican Fayette County Commissioner, celebrated his 84th birthday earlier this year with a party that included entertainers Christina Aguilera, Bette Midler and Robin Williams.
Hardy had five children with his first wife and high school sweetheart, Dorothy, whom he divorced in 1997. He had two daughters with his second wife, Debra, an employee of the lumber company, before divorcing her.
Hardy and Georgi were married May 5 in Las Vegas. Before that, Georgi worked in a salon at Hardy's posh Nemacolin Woodlands Resort and Spa in Farmington.
Hardy's daughter Maggie Hardy Magerko now runs the lumber company.
(Photo credit: Tony Tye/Pittsburgh Post-Gazette)