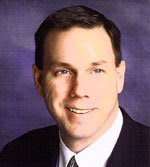 Keith R. Stamm, president of the Reading School Board, and the Republican candidate for mayor of Reading, is recovering from serious injuries sustained in work-related fall.
Stamm was admitted to the intensive care at Reading Hospital on Monday after a work-related accident, according to his hometown newspaper.

A hospital spokeswoman told the Reading Eagle on Monday that Stamm, who was injured Friday, was in listed in fair condition.

Details of the accident are sketchy, but Stamm, a real estate agent, fell from a "significant height" at an undisclosed location, the newspaper reported.

Stamm, who blogs at http://keithstamm.blogspot.com/ hasn't posted anything on his site since August 7.

I don't know Keith Stamm personally, but I've read some of his blog postings and read many articles about his campaign for school board and mayor. He's a breath of fresh air in the stale atmosphere of one-party rule and cronyism in Reading.

The timing of the accident is bad because I'm sure Stamm will need lots of time to recover and that will limit his ability to campaign time as we approach the November election.

Stamm is offering the residents of Reading a qualified alternative to the current do-nothing mayor.

But politics will have to take a backseat to Stamm's health. My best wishes to Keith Stamm for a full and speedy recovery.