The biggest ham in Pennsylvania 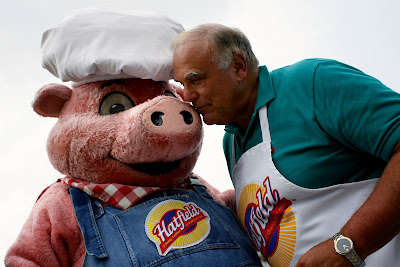 They say any publicity is good publicity, but Gov. Ed Rendell may be proving that maxim wrong.

Gov. Rendell (he's the one on the right) is pictured here with Smiley the Hatfield Pig during the third annual "Grillin' with the Guv" event Friday at the state Capitol in Harrisburg.

I'm not sure if Smiley is giving Rendell political advice or the governor is attempting to plant a smooch on the Hatfield mascot.

It's hard to say how some traditions get started, but this one will hopefully end when Rendell leaves Harrisburg in 2008 (if Hillary Clinton is elected president) or 2010, when Pennsylvania elects a new governor.
Rendell spent a few minutes in the blazing heat Friday grilling hot dogs for anyone who passes by. With the Pennsylvania Legislature on vacation until mid-September and many state workers using up vacation time, there weren't many takers, even if the hot dogs were free.
In fairness to the folks at Hatfield, the event is a fundraiser with proceeds going to the Boys & Girls Club of Central Pennsylvania. Hatfield contributes $1 for each hot dog served. The company also donates cases of hot dogs to homeless shelters.
(The photo was released by The Associated Press. It was taken by Sean Simmers of the The Patriot News)