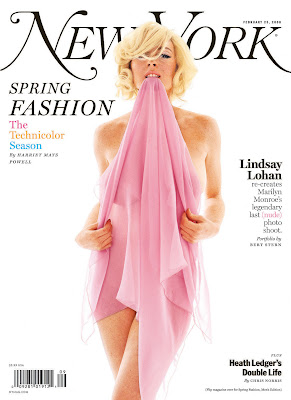 With her movie career in the toilet, what's left for Lindsay Lohan?

The former child star, whose promising film career has been overshadowed by tabloid headlines, is attempting a comeback by doing what many female celebrities do to revive their sinking careers ... Take off their clothes.

Lohan is featured in the pages of New York magazine wearing a blond wig and little else.

The pictorial recreates Marilyn Monroe's last nude photo shoot by photographer Bert Stern, who was behind the camera for the Vogue photos of Marilyn Monroe some 45 years ago.

Fast forward four decades. Same photographer. Same location (the Hotel Bel-Air in California). A different model. Instead of the Hollywood icon, in steps Lindsay Lohan, whose film career has been overshadowed by automobile crashes, DUI arrests and stints are rehab centers.

Stern told the Associated press that he thought the photo shoot would be good for Lohan's career, giving her the chance to portray herself as a "grown-up."

He also praised Lohan for her willingness to do the photo shoot in the nude, the news service reported.

"I thought she was a natural, not at all squeamish," Stern told the AP.

Squeamish? Has this guy seen "I Know Who Killed Me" or "Georgia Rule" or "Just My Luck"?

This has not been a good year for Lohan ... and it's only February.

Lohan is nominated for several Razzies for her awful performance in "I Know Who Killed Me" and she's also been named to Mr. Blackwell's Worst Dressed List. She was also photographed guzzling champagne at a New Year's party despite her much-publicized drinking problems.

I guess she has nothing to lose by posing nude. It certainly can't hurt her career.

Paris, LiLo, Brintney etc, etc? we need to ignore them all.

Lindsey is a dumb kid who is an addict. The addict part or her brain has now probably killed the talent part of her brain, and the thing about these photos creep me out - it's a foreshadowing of her life to come.

She and Britney Spears are killing themselves and we are all encouraging the behavior by talking about them and the media is glorifying them and their behavior...which is wrong.

PS one addict I hope gets it together? Amy Winehouse. What a voice and talent. But she'll end up like Janis Joplin, Jim Morrison ,etc: on a slab from an o.d. eventually....what a pity they all waste talents like these...

Marilyn Monroe did not take drugs. See her real story at www.marilynmonroefoundation.com