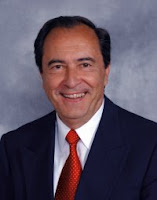 Michael A. O'Pake, 68, is running for another four-year term in the Pennsylvania Senate. Nothing surprising there. He's been holding the 11th District seat in Berks County for 35 years.

What's interesting is what O'Pake told the Reading Eagle about why he's running for another term.

O'Pake wants to go back to Harrisburg to work on school property tax relief. That's the same promise he's been making to Berks County residents for 35 years. At some point, the voters in Berks County have to realize that O'Pake can't deliver. He's had 35 years to address the property tax issue, but has failed for 35 consecutive years. Why keep sending him back to Harrisburg?

While he's failed to provide property tax relief for homeowners, O'Pake was able to deliver several pay raises for himself in the past four decades, including voting yes to the infamous, middle-of-the-night pay raise in July 2005.

O'Pake also told the newspaper he wants to "offer hope and opportunity to people, so they can get good paying jobs, benefit from quality education and give back to the community." Sounds a little like Barack Obama.

O'Pake's legacy in nearly 40 years in the state Legislature can be summed up in two words, "Empty promises."