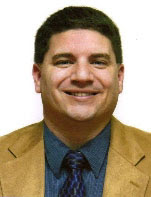 A second Republican candidate has announced he will seek the party's nomination to run against Rep. Tim Seip, a freshman Democrat who represents parts of Berks and Schuylkill counties.

Seip was a surprise winner in 2006 in the 125th House District, which had been in Republican hands.

James P. McGovern, 35, wants a shot against Seip, according to The Reading Eagle. The other GOP candidate seeking the party's nomination is Gary L. Hornberger, who lost to Seip in 2006.