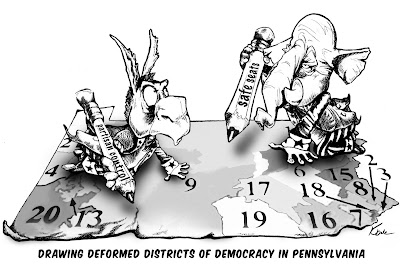 A guest column today by Andrea Mulrine I wholeheartedly agree with. Gov. Ed Rendell, who I rarely agree with, also said Thursday after signing the open records bill that he would most like to see redistricting and campaign finance reform as reform agenda priorities in Pennsylvania.

Redistricting could lead to Pa. reform

Movement within Pennsylvania's General Assembly toward government reform may not be dead, but it's barely breathing.

The profound lack of results is more than enough reason for citizens to demand that redistricting reform legislation is passed by early summer. The boundaries of legislative districts to which voters are assigned are changed every 10 years to accommodate shifts in population. The shape of the redesigned districts are drawn by the very politicians whose political futures will be affected. Redistricting as currently practiced has made Pennsylvania one of the most gerrymandered states in the country.

Gerrymandering means drawing the boundaries of voting districts in such a way as to rig elections, thus denying citizens their right to a fair vote.

Politicians no longer need constituents to vote them into office. So insidious and long practiced is this "self-election" that many voters don’t connect the dots between gerrymandering and the hijacking of their constitutional rights. Who cares?

* Paying high taxes;
* Affording access to health care;
* Decent roads and safe bridges;
* Quality public education;
* Losing your civil rights;
* Having a voice in the way you are governed.

Sure-fire signs of the effects of non-representative gerrymandering you may have noticed include:

* Loss of voting power. Voters lose their most important civil right — the right to choose their representatives. This basic democratic freedom is repeatedly stolen by politicians to ensure their own re-election and to expand their own political power.

* Low voter turnout. When the outcome of elections is predetermined by politicians, going to the polls and voting becomes an empty exercise. Eventually voters stay home when they realize they are not able to elect the representatives they want.

* Political polarization. When district boundaries are drawn to guarantee the election of incumbents or another candidate from the same party there is no need to reach out to independent voters or attract voters from the other party. This means that real campaigning for office shifts to primary elections, which are usually dominated by the party's most extreme supporters. Those who finally take office are often more immoderate politically and more out of touch with mainstream Pennsylvania. This polarization produces the extreme rhetoric and political squabbling that is suppressing progress in Pennsylvania today.

* Unresponsive representation. Politicians who are assured of re-election stop listening to constituents. They vote themselves pre-requisites, high salaries, generous healthcare plans, and retirement benefits. Their pensions are four times what they would get in the private sector. And all this is made possible by our tax dollars.

So far, this is what we've gotten for our money:

After a half-decade of intense pressure from government reform advocates, the House and Senate passed a tepid lobbying law that barely addresses the issue of gifts, meals, travel and entertainment received by public officials. Following the money trail doesn't work in Pennsylvania. Lobbyists still don't have to show all they spend to get what they want.

Pennsylvania has one of the worst open-records laws in the nation. But after months of debate, action on open-records legislation was delayed for "further study." It is to be hoped that something will be passed soon, but will it be just better than what we have or the best in the nation?

Other reforms recommended by a legislative reform commission have received little or no attention.

Politicians are not family heirlooms, yet some Pennsylvanians have inherited legislators from their parents' generation. Many incumbents run unopposed and these non-competitive elections frequently happen where district boundaries are drawn to protect the interests of incumbent lawmakers. In the process the primary right to "one person one vote" within a representative democracy is hijacked.

How can gerrymandering be stopped? Two words: Redistricting Reform. More than 200 years of American history has shown that as long as redistricting is left to the discretion of politicians, political parties will continue to gerrymander Pennsylvania for their own political advantage.

If you care about the shape of representative democracy in Pennsylvania, call your state senators and representatives today and demand that they work diligently to pass redistricting legislation by June 2008. If legislation is not passed by June, the next 10 years will be a blank check for more of the same.

Andrea Mulrine is president of the League of Women Voters of Pennsylvania.

Here are the e-mail lists of the Pennsylvania State Representatives and State Senators. What better way to spend President’s Day?

Members of the House of Representatives – E-mail List
http://www.legis.state.pa.us/cfdocs/legis/home/member_information/email_list.cfm?body=H

For more information on the redistricting issue, check out:
http://palwv.org/issues/2008Redistricting.html

Here's what the League of Women Voters suggests on their website:

Contact your PA Senator and Representative AT LEAST ONCE EACH MONTH and voice your support of redistricting legislation. This can be done via phone, email or letter. (Visit the Pennsylvania General Assembly web site to find your legislator.)


Forward our most recent op ed to your legislators.


Encourage your friends and family members to do the same.


If our op ed was not printed in your local paper recently, please submit it to your local editor with a request that they print it.


Get other groups involved! If you're a member of other civic organizations, mobilize those resources in support of this critical issue. Ask that the group leadership issue letters to your representatives and to the local newspaper in support of the League position.


Let us know what you're doing! Keep us informed by emailing info@palwv.org to tell us what action you're taking.

I see that Bill Shaw of the Writemarsh blog has joined in to help the Pennsylvania League of Women Voters' call to lobby the state reps and state senators on the vitally important issue of redistricting in Pennsylvania.

Political bloggers who care about bringing real and honest reform to Pennsylvania politics ought to join in this effort and should link to Andrea Mulrine's extremely well-written article on redistricting.

In case you'd like to check it out, here's Bill Shaw's link and his viewers' comments on redistricting: