The ACLU gets it right for once 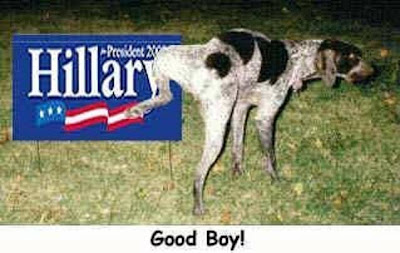 This is one of those debates where I see legitimate points on both sides.

One of the most annoying things about political campaigns is being bombarded by hundreds of political signs on the side of the road. Candidates now compete to see how many signs they put up and how early to put them up. I complained last fall about political signs appearing in September when the election wasn't until November.

If your opponent puts up a sign, you put up two. If he puts up five, you put up 10. And then there's the candidates who don't bother removing the signs after the election. I still see a sign for Reading Mayor Tom McMahon on Lancaster Avenue just before the Bingaman Street bridge every time I come to that traffic light. That sign has been there for at least five months and the McMahon people have made no effort to remove it. He won the election. He's the mayor of Reading. Can't he send a public works guy out there to remove the sign?

You can also make a strong argument for not restricting the placement of political signs. Political speech is protected by the First Amendment. Candidates have a right to make their case to potential voters (except where McCain-Feingold steps in and restricts speech, but that's another story).

The dispute over political signs is headed to court in Pennsylvania, where the ACLU has sued South Park Township near Pittsburgh over restrictions the township has placed on how long political signs can be displayed.

A federal judge issued a temporary injunction Tuesday, preventing South Park Township from enforcing its sign ordinance, which limits the placement of political signs to 30 days before the election and mandates they be removed within five days after Election Day.

The ACLU objects to the restrictions. While I oppose 99 percent of what the fascist ACLU stands for, I'm inclined to side with the group on this one, especially since the South Park Township ordinance may also cover signs placed on private property.

"The constitution guarantees freedom of speech year-round, not just 30 days before an election," Witold "Vic" Walczak, legal director for the Pennsylvania ACLU, told The Associated Press.

The ACLU sued on behalf of Joseph P. Rudolph, who wants to display signs on his lawn for the April 22 primary election, according to the wire service. U.S. District Judge Gary Lancaster, who issued the temporary restraining order Tuesday afternoon, scheduled a hearing for Feb. 27, the AP reports.

I'm anxious to see how the case turns out. I think restrictions on how long political signs can be placed on public property are reasonable. There's a point where hundreds of signs placed next to a highway can become a distraction to motorists, not to mention an eyesore.

And those signs don't last long in bad weather. Should the candidates and their supporters be responsible for picking up signs the wind blew down? What happens with public works crews have to cut the grass along a highway? Are they responsible for putting the signs back exactly the way they found them? What if a sign gets chewed up by the lawnmower?

As for political signs on private property, the government has no business telling a homeowner when, where or how many signs he can display on his own land.

Maybe,If McMahon took the sign down former Mayor Eppihimer would take his down also.