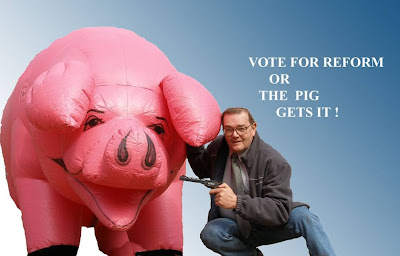 Citizen activist Dennis Baylor announced today that he is planning to run as an independent against state Sen. James Rhoades, who has held the 29th Senate District seat since 1981.

Rhoades has already announced he will seek another four-year term. The 29th Senate District covers all of Schuylkill County and parts of Berks, Carbon, Lehigh, Monroe and Northampton counties.

Baylor, who lives in Berks County, said he will begin collecting signatures on Feb. 13 to have his name placed on the November ballot. He'll need 1,300 signatures, about three times as many as a Republican or Democrat needs to get on the ballot.

"I think the average citizen is sick and tired of the two-party stranglehold on politics in Pennsylvania, and the gridlock that results from representatives playing partisan games," Baylor said.

Baylor has been one of a handful of citizen activists leading the reform movement since the Legislature approved the July 2005 pay raise for itself, the governor and the state's judges.

"Harrisburg has got to wake up to the fact that the 'gilded-age' of state government is long past, and has got to quit trying to hoodwink the public into believing that there is some less painful way to pay for the most extravagant state government in America," Baylor said.

One of his proposals is to eliminate the state Senate altogether "as one of a number of possible modernizations of government that a citizen's constitutional convention might consider."

The Pennsylvania Legislature is the most expensive in the country, costing about $333 million a year to run.

In addition to cutting the size of government to lower taxes, Baylor said in a press release that he will also focus on improving health care, (while at the same time lowering costs), improving the quality of education in Pennsylvannia, improving the environment, lead the fight against the upcoming rise in electric rates for residents and businesses in the 29th district and restore regulations to combat usurious interest rates.