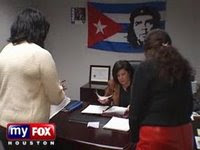 The troubling display of the Cuban flag at one of Sen. Barack Obama's campaign offices in Texas is getting more attention.

The controversy started out on Fox News, spread through the blogosphere and now is getting attention in the mainstream media (although the liberal media continues to ignore it.)

From an editorial in today's Investor's Business Daily:

"How is it a front-runner for the highest office in the land can reject an American flag on his lapel but permit the display of a huge Cuban flag at one of his offices, emblazoned with a mass murderer's mug?"

"The display of the Castroite flag with Che's picture on it sends a particularly disturbing message about his campaign. Apparently, Obama tends to attract the kind of people who think of mass murderers like Che and Fidel as romantic revolutionaries. Those same people see Obama as a man with a messianic message. These are the voters he'll be indebted to should he win higher office."

Are candidates personally responsible for the decor in each and every one of their campaign offices?