Now we know who to blame -- Arlen Specter 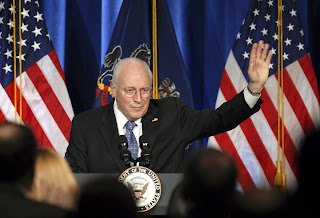 Counting down the moments until Vice President Dick Cheney took the podium, I had to endure Pennsylvania GOP Chairman Robert A. Gleason Jr. introduce various party officials ... when he came to Sen. Arlen Specter.

Gleason introduced Specter as the "leader of the Republican Party in Pennsylvania."

At last we learn the identity of the man most responsible for leading the party into the abyss in recent years. (And I thought it was Tom Ridge).

The culprit turns out to be Arlen Specter, Pennsylvania's senior senator. And I do mean senior. Specter turns 78 on Tuesday and plans to run for reelection in 2010, when he will be 80.

Under Specter's leadership, if that's what Gleason wants to call it, Pennsylvania Republicans have lost the governor's mansion, a U.S. Senate seat and a half-dozen Congressional seats.

I can't blame Specter for losing control of the Pennsylvania House of Representatives after 12 years of Republican control. The blame for handing the state House over To Democrats goes directly to Rep. John Perzel, the former speaker of the house who pushed for the ill-fated, middle-of-the-night pay raise vote in July 2005.

And let's not talk about Pennsylvania's role in the last two presidential races when Keystone State voters backed Al Gore in 2000 and John Kerry in 2004.

If you want to know what's wrong with the Republican Party in Pennsylvania, all you had to do is look at the weekend gathering in Harrisburg. If Arlen Specter is the leader of the Pennsylvania Republican Party, I'm thinking of switching to the Libertarian Party real soon.

After it got done feeling sorry for itself, the Pennsylvania GOP Committee did find time to endorse a slate of candidates for statewide offices this year:

Corbett should win reelection as Attorney General and bide his time until he runs for governor in 2010.

Ellis doesn't stand a chance for state treasurer. That's too bad because the position tends to be stepping stone for higher office. See Bob Casey Jr. The Pennsylvania GOP lost an opportunity to put a winner in this race.

I've never heard of Chet Beiler, so I can't say anything about him.