A Valentine from Hillary or Obama 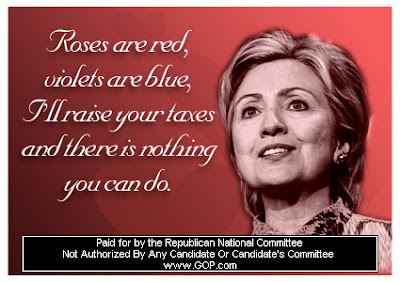 The Republican National Committee has an easy and no-cost way to send your favorite Republican a Valentine's Day card this February 14.

You can choose between three Hillary Clinton cards or three Barack Obama cards post on the RNC Web site and e-mail them to your favorite valentine.

The three Hillary Valentine's Day cards have a common theme: higher taxes. The three Obama cards focus on the junior senators inexperience and his rating as the most liberal member of the U.S. Senate.

There's nothing as amusing on the Democratic National Committee Web site. I guess the Democrats have their own problems to worry about since the coronation of Queen Hillary has been postponed indefinitely.