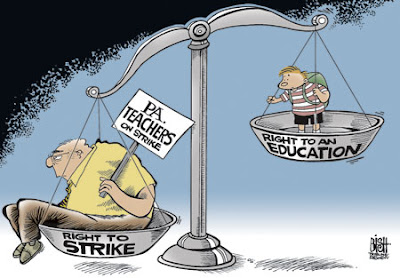 Three Southeastern Pennsylvania newspapers are throwing support behind an effort to ban teacher strikes in Pennsylvania.

House Bill 1369 was introduced last year by state Rep. Todd Rock, but has stalled in the Legislature. Does the fact that the state's teachers' union is one of the biggest financial contributors to incumbent state lawmakers have anything to do with the lack of progress on the bill?

The Mercury in Pottstown is urging all 501 Pennsylvania school districts to consider adopting a resolution supporting a ban on teacher strikes in Pennsylvania.

In an editorial in Saturday's edition, the newspaper says, "The argument is not whether teachers are paid too much or too little; the argument is whether labor actions should be allowed to disrupt public education. We believe they should not."

The West Chester Daily Local News has also run the editorial on its opinion pages calling for a ban on teacher strikes.

The Bucks County Courier-Times took a similar position on its editorial pages last week after the Pennsbury School Board unanimously adopted the anti-strike resolution.

The Antietam School Board in Berks County may vote on the resolution at an upcoming meeting.

Here is the text of the resolution school boards are being asked to adopt:

WHEREAS, teacher strikes and strike threats undermine the ability of Pennsylvania's school board directors to provide children with a quality public education at an affordable price, and

WHEREAS, retroactive teacher contract payments can lead to large spikes in school property taxes, and

WHEREAS, thirty-seven (37) other states already guarantee students the legal right to receive a strike-free public education, and

WHEREAS, there is no evidence to suggest that teacher strikes and strike threats improve the quality of education delivered to Pennsylvania's students, and
WHEREAS, public employee strikes constitute an actionable breach of duty to members of the public and create community resentment and conflict, and

WHEREAS, Pennsylvania ranks #1 in the nation for teacher strikes each year with tens of thousands of affected students and families, and

WHEREAS, seven out of the top ten states in the U.S. (70%) for highest average teacher salary prohibit strikes (source: NEA 2006-2007 salary rankings), and
WHEREAS, the Pennsylvania State Constitution mandates that the general assembly provide for a "thorough and efficient system of public education to serve the needs of the Commonwealth", and

WHEREAS, compulsory (last-best-offer or issue-by-issue) binding arbitration as a mechanism to resolve teacher contract disputes is a flawed idea for taxpayers because it strips away the voice of the people’s duly elected school officials;

NOW THEREFORE BE IT

RESOLVED, that the [Name] School District, by a majority vote of its Board of Directors, demands that the Pennsylvania State Legislature enact House Bill 1369 from Chief Sponsor, Rep. Todd Rock, to make teacher strikes and retroactive contract payments illegal, while retaining fiscal authority over labor costs with the people’s duly elected school officials;
Signed this [date] in the year [year]

I support the right of anybody to join a union and go on strike. I do admit, however, that when teachers do it, it is generally ineffective because it looks bad.

However, I have a cousin and several friends who teach, and I can assure you that the average teacher does things that are not required by his or her contract. Things like chaperoning dances and working the concession stands at football games… pretty much every teacher does these things without getting paid for it. Note that these are things that parents ought to be doing, but in many cases do not.

Also, let’s not overlook now many times a teacher will buy classroom materials out of his or her pocket.

Instead of going on strike, teachers should only do the things that are required of them as per their contract, and not one thing more. Let’s make the parents get off their rear-ends and volunteer at their kids’ schools.