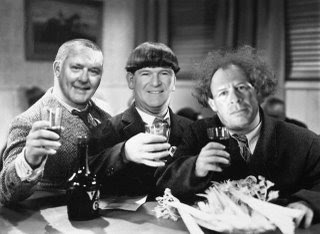 The fallout over the growing feud between Montgomery County Sheriff John P. Durante and Montgomery County GOP Chairman Ken Davis continues, accordng to reporter Margaret Gibbons of The Times-Herald in Norristown.
It's getting ugly. And as usual, the blame falls squarely on the shoulders of party boss Ken Davis, who has managed to lead the once-dominant organization into the abyss over the past four years.

"I am not a little kid and should not be treated that way," Durante told Gibbons about the way Davis handled the endorsement contest for the 17th District state Senate race. "That is the way he treats all of the committee people. It's time that the committee people take back this party."

The always tactful Davis responded this way: "He (Durante) is just unhappy because he lost face," said Davis. "Let's face it. He got his butt kicked."

Nothing like party unity during an election year. How much longer does Davis have left as party chairman? Ken Davis has been the best friend Democrats have had in Montgomery County since he took over as GOP chairman.

I agree -- Ken Davis has made a grand mess of things. Look at this post from www.Writemarsh.com:

The Democratic Party and the Republican Party are state actors under U.S. law. Neither party may issue rules designed to exclude a female candidate or a minority candidate in the nomination process. Such discrimination violates the Voting Rights Act of 1965 and the United States Constitution.

The United States Supreme Court has rejected the argument that a "political party is not a 'State or political subdivision' within the meaning of Section 5" of the Voting Rights Act of 1965. Morse v. Republican Party of Virginia, 517 U.S. 186 (1996).

The Supreme Court likewise stated that "We have previously recognized that Section 5 extends to changes affecting nomination processes other than the primary." Morse v. Republican Party of Virginia, 517 U.S. 186 (1996).

A copy of the High Court's Morse opinion can be viewed at Cornell Law School's website at:

This isn't about the candidates -- it's about the process.

The problem with Ken Davis' Monday night meeting at the T.K. Club was that it was the only endorsement convention for the 17th District Senate Seat. Anything held after that night would be nothing but a sham.

There are important constitutional and statutory rights involved here.

If a woman was on the 17th District Senate Seat ballot, there was a chance she would have garnered many votes from the women of the Montgomery County GOP Committee. Half of the MontCo GOP committee are women, after all. If she wasn't such a threat, then why did Ken Davis consider her a problem.

Well, we'll never know how a legitimate vote would have turned out. Ken Davis made sure of it, as his phone message posted on www.writemarsh.com makes clear.

Ha ha ha ha! What a belly laugh! Sounds like there are two sheriffs in town and this is the OK Corral, right?

King Ken has 2 months to go...no, he certainly is no Herb Barness.

So who is the annointed one to replace Davis?

Really, what's the difference the republicans will not take this seat. Durante probably won't win re-election as sheriff next time. The Democrats will be the majority party in 4 years.

Who knows what will happen four years from now.

The important thing is that we strive make Montgomery County and all our our communities the best that they can be. That way everyone wins.

Being elected is a basically a job interview, after all.

Wow, Lancie-Poo does not like Spanish speaking folks and Ken Davis doesn't like women. Durante got a bum deal.

If the GOP does not get somewhat functional the Dem's will keep the seat for sure! Give the women a chance, she could carry the female vote.

It is all about the GOP taking the seat away....Think Boys!

In case people are having a hard time finding the audio of Ken Davis' phone message on the Writemarsh blog, here's the correct address:

There's a list of blog articles on the lower right portion of the screen.

Lisen to the phone message carefully, and decide for yourself.

Gee, why not push a little harder? Didn't she say she could run unendorsed? BTW Where's her press release on Chinese New Year? Thought she loved Yang Ming?

"Wow, Lancie-Poo does not like Spanish speaking folks and Ken Davis doesn't like women. Durante got a bum deal.

If the GOP does not get somewhat functional the Dem's will keep the seat for sure! Give the women a chance, she could carry the female vote.

It is all about the GOP taking the seat away....Think Boys!"

P.S. Like it or not, Ken Davis did nothing illegal. So a lawsuit would go nowhere

Would you feel the same way if Ken Davis deliberately excluded an African American candidate or a Hispanic candidate instead of a woman?