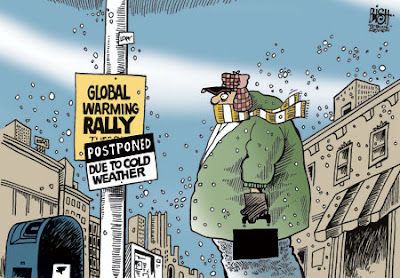 "A study done for the British government says that global warming will kill thousands. It also says lives will be saved due to warmer winters. OK, which is it? Or is it neither?"

IBD is one of the few objective sources of news and commentary left in the mainstream U.S. media. The newspaper has not jumped on the global warming bandwagon that so many other new sources have accepted as gospel.

"This disconnect supports our belief that the climate change alarmists are not as interested in protecting the environment as they are in choking developed economies, hobbling capitalism and punishing those who engage in conspicuous consumption," the editorial continues.

Read the full text of "Will Global Warming Save Lives?" in today's edition of Investor's Business Daily.

Also check out this post at the Carpe Diem blog, "Global warming is to blame for global cooling"

The mainstream media just keeps spewing out the left-wing propaganda without ever asking the most basic questions.

Rodney Viereck of the NOAA Space Environment Center has penned the following: The Sun-Climate Connection

Note the caption on one of Viereck's graphics: "The globally averaged sea surface temperatures are plotted with the sunspot numbers (Reid; 1999). Both sunspot number and solar cycle length are proxies for the amount of solar energy that Earth receives. The similarity of these curves is evidence that the sun has influenced the climate of the last 150 years."...